Pack a lunch and go for a drive! Thanks to Mazda here are some of my favorite Scenic Drives in DFW #DriveMazda

We love to drive. A lot. One of our favorite ways to spend a weekend afternoon is taking a scenic drive somewhere in the area.

Throughout our whole marriage my husband has always loved driving. We took drives before we had kids and we’ve taken a lot since we had kids. We were lucky that the twins in particular were always fantastic in the car. I remember one time we drove from DFW to Vicksburg, Mississippi, and back to DFW all in one day. With the twins who were probably around 18 months old at the time.

We’ve also driven down to Austin and back all in the same day several times. But Littlest isn’t as great in the car as the twins were at his age, so now we really enjoy taking local scenic drives. 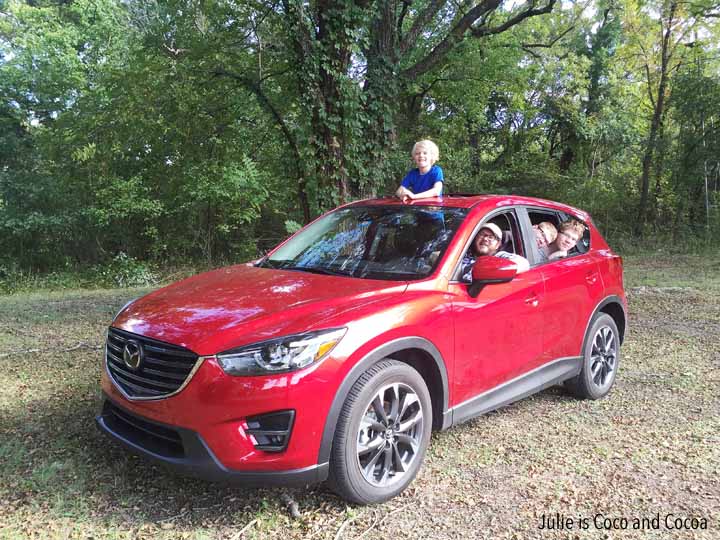 A couple weekend ago we got the chance to drive the Mazda CX-5. What better way to test it out than take it for a drive and an afternoon picnic? I actually prefer a fall drive and picnic than summer because it’s not as crazy hot outside.

And a car that has a sunroof is an instant winner with all the kids at my house. Littlest told me his favorite part about the car, other than the sunroof, was that the leather seats were ‘soft’. He’s really into the way things feel lately. Every morning when he puts on his socks he said that they ‘feel weird’. And then we spend 5 minutes adjusting said socks. Every. Single. Day. 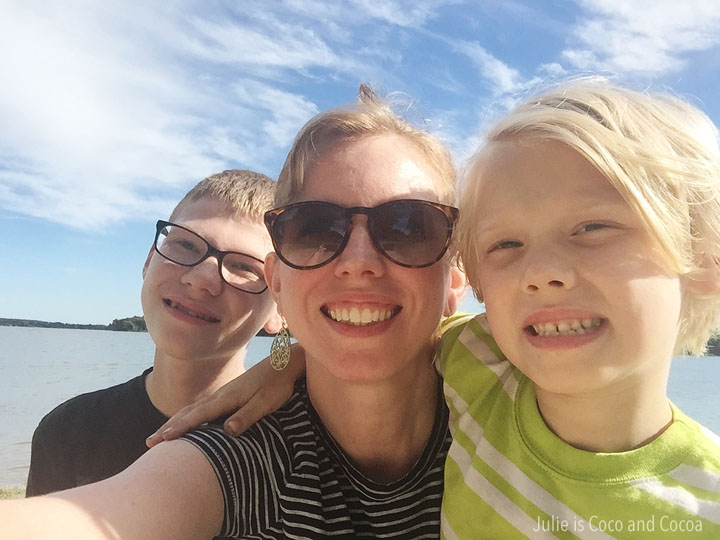 So what are our favorite scenic drives in Dallas and Fort Worth? In no particular order: 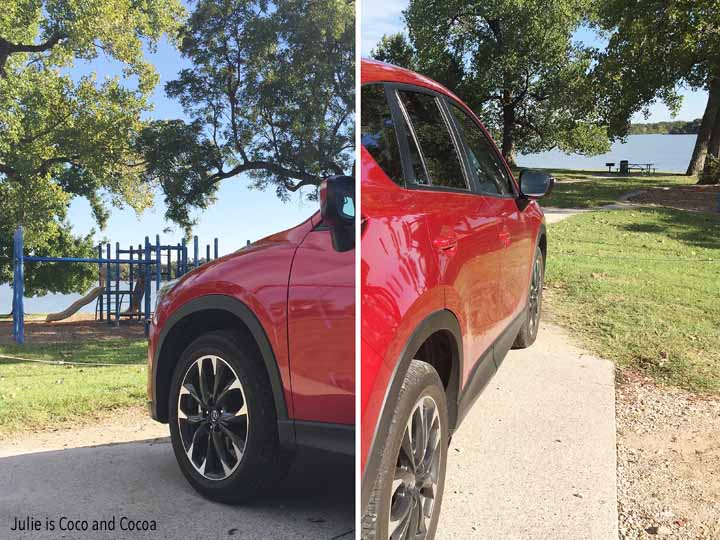 I already mentioned Littlest was impressed by how ‘soft’ the car was, and everyone liked the sunroof (we have a sunroof on our personal car as well). But I really liked driving the Mazda CX-5! The kids all fit (an actual concern with two growing teenage boys). The seats were comfortable on all of our excursions. The controls were easy to use, I could flip between navigation, radio, and everything else I needed. The backup camera was great. I could see everything I needed to. The blind spot alerts on the side view mirrors are really handy. The keyless entry and start was my favorite (my car doesn’t have that!) And it was just really fun to drive. 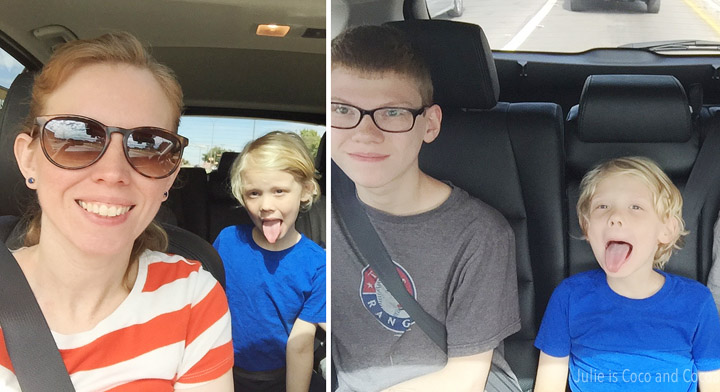 I mentioned how much my husband likes to drive? I asked him to give me some of his feedback on our week with the Mazda CX-5.

A car on a real roads doing real things. What do you do when you need a practical family car but would rather be on that curvy road? The Mazda CX-5 AWD is a pretty good solution. It’s a mid sized crossover that drives much more like a car than your average SUV while still comfortably seating 2 adults, 2 teenagers, and one energetic 1st grader.

I was pleasantly surprised in the comfort and support of the seating. I was actually able to adjust the driver’s seat to a reasonably car like position. My wife, conversely, was able to adjust the same seat to a more “kitchen chair” like position which she favors. I found the pedals and steering wheel to be perfectly placed, even in my more reclined position. The controls were pretty straight forward and the dash was easy to read. I never found myself hunting anxiously for some button that controlled a function I needed that nevertheless remained perfectly hidden from me.

Driving is where the CX-5 really impressed me. The suspension was sporty which in other cars can mean a harsh ride, but not in the Mazda. The ride was comfortable and it felt balanced and confident while driving. It was truly a fun car to drive feeling much smaller and lighter than it’s actual size would suggest.

One thing in particular that stood out was how well it held a speed at whatever that may be. This made driving, especially at low speeds and in school zones, almost effortless. It bothers me when a car won’t hold 20 mph without using the brake. The CX-5 easily stayed at whatever speed I wanted with little effort by my right foot.

My other favorite thing was Mazda’s adaptive cruise control. This baby step towards autonomous automobiles worked so well in the CX-5 that I was able to drive from North Fort Worth to Arlington, a distance of about 20 miles through the city, including a freeway change, without touching the gas or brake pedal once. This feature allows you to set an interval between you and the car in front and max speed and then uses radar to make sure that the car drives as fast as it can while maintaining the set interval.

Even if it sounds confusing, it works just like your old cruise control. The difference is that instead of being relegated to intercity travel it now takes all of the effort out of daily bumper to bumper traffic. I found that I liked using it in rush hour and was almost giddy as it sped up and slowed down (even to a complete stop) without any input from me. Even if someone cut me off, because I usually set a large interval, the car would seamlessly adjust for the now reduced interval like a pro. For me, this is now a must have feature, especially if it is implemented as well as Mazda has in the CX-5 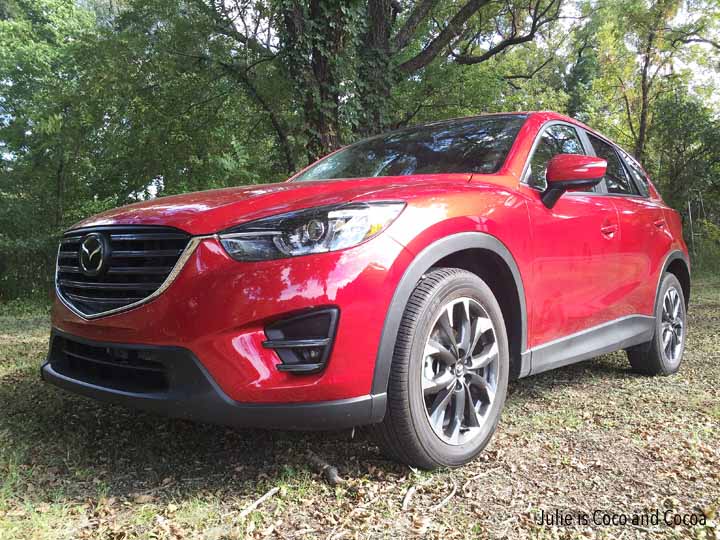 Need some ideas for what to pack in your picnic lunch?

And check out my list of Kid Approved Road Trip Apps

I was provided with a Mazda CX-5 for a week, no other compensation was received