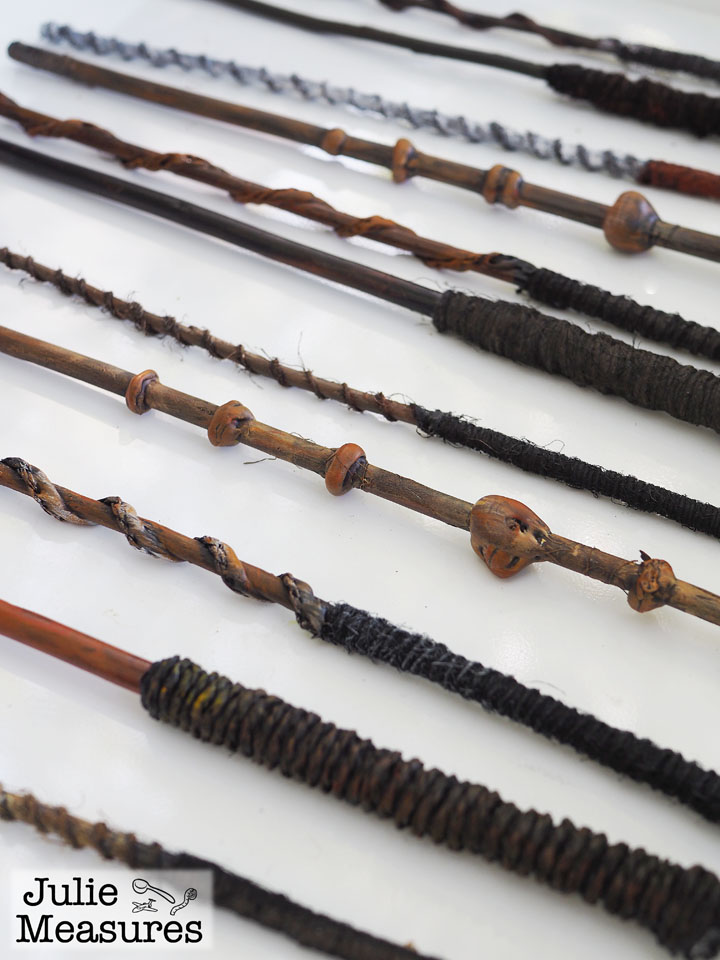 What is a wizard, or a witch, without a wand? Of course throwing a Harry Potter party one of the first DIY projects I tackled were some homemade wands. 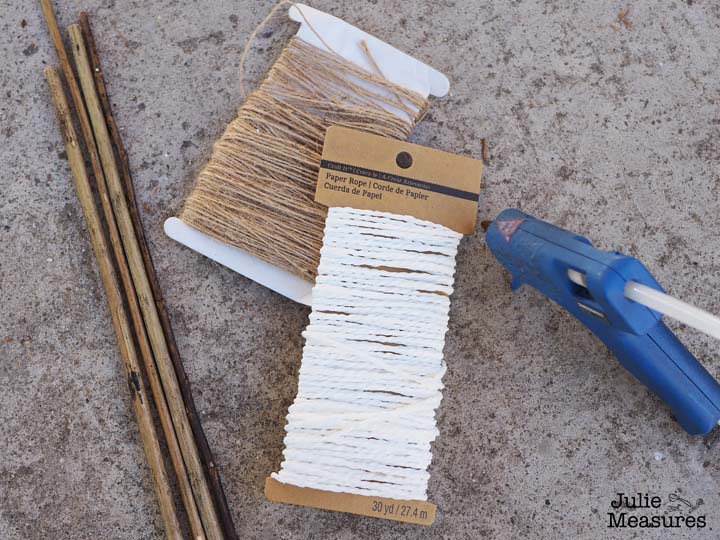 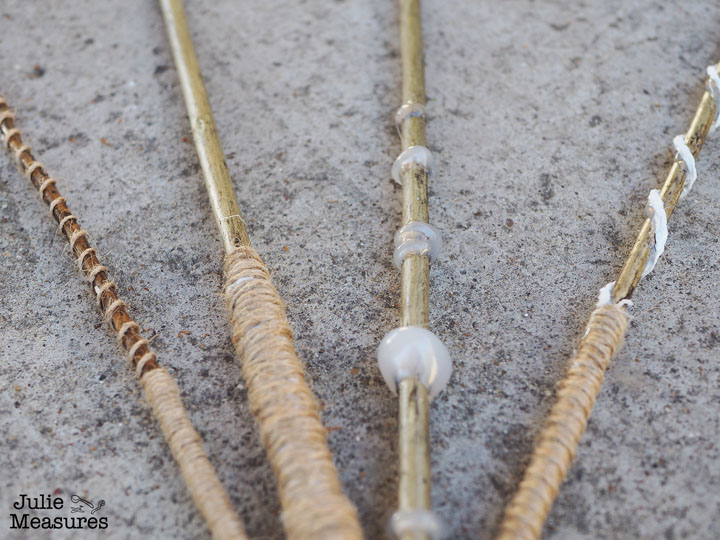 Of all the Harry Potter crafts, this one probably takes the most creativity. The first step was to add texture and dimension to the wands. I did this by wrapping the rope and twine around the wands and also by adding dollops of hot glue. 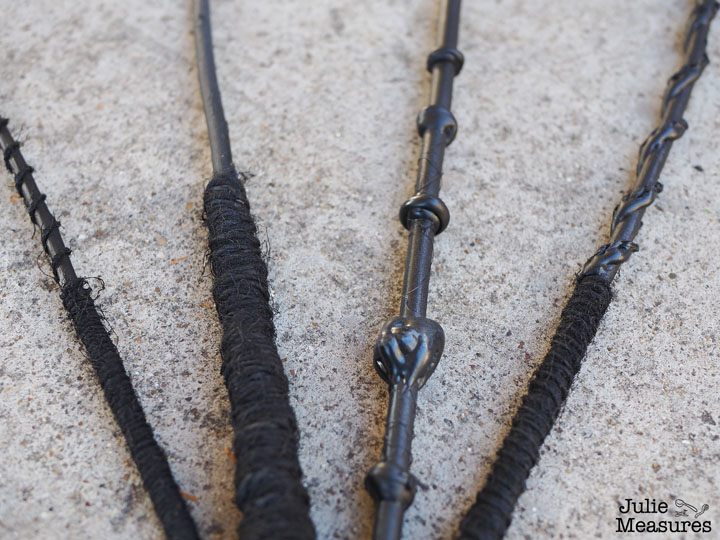 With the twine and hot glue on the sticks it’s time to paint them. I started with a coat of solid black spray paint on each wand. 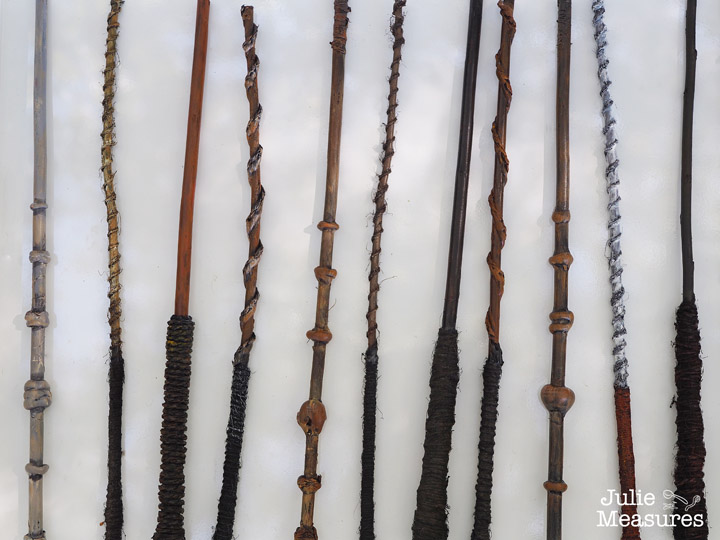 Then it’s time to personalize! I used craft paints in shades of browns, black, and white to paint the wands. I used different shades on the different textures to create dimension shading and personality to make each wand unique. 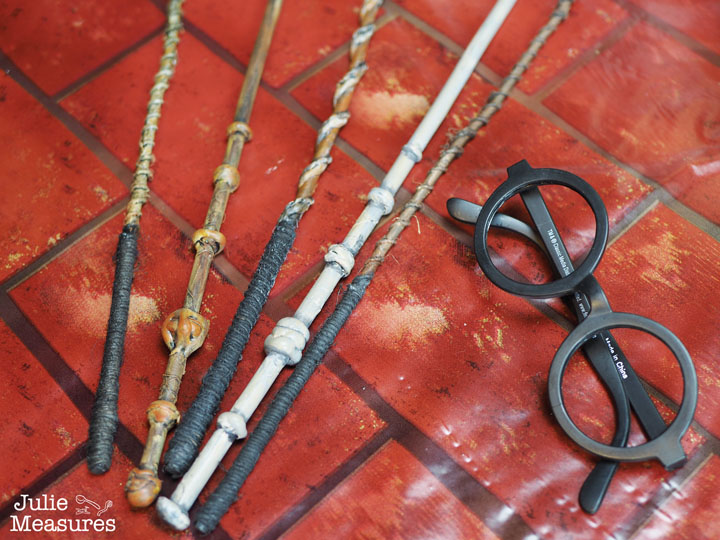 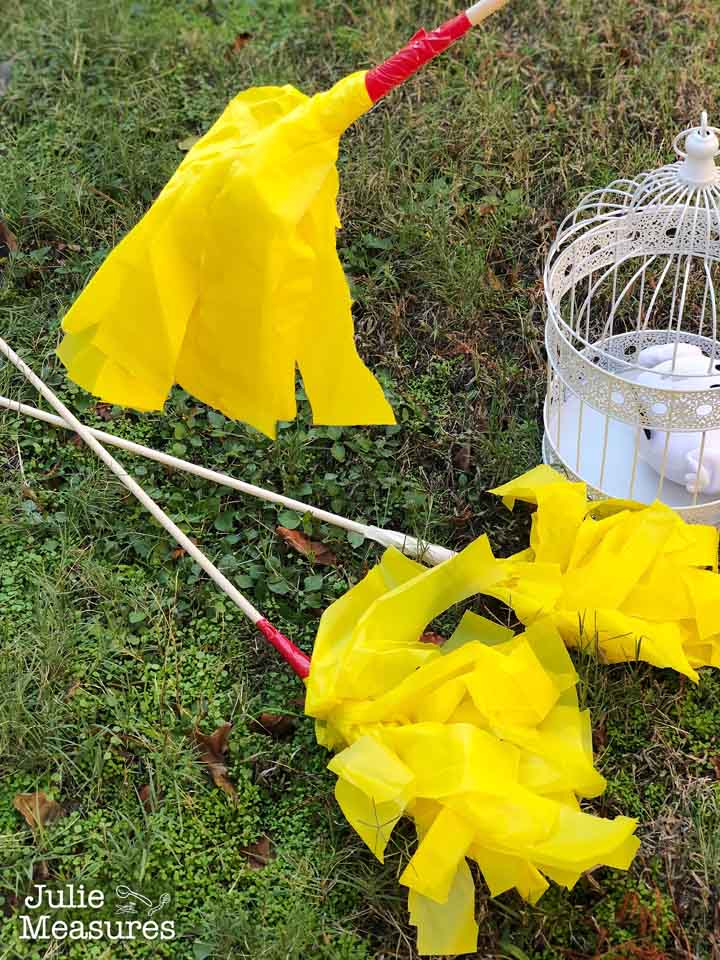 Essential to Quidditch, and an important part of the Harry Potter books, are the brooms. Harry has a few brooms he uses including his Nimbus 2000 and his Firebolt that Sirius Black sends him. 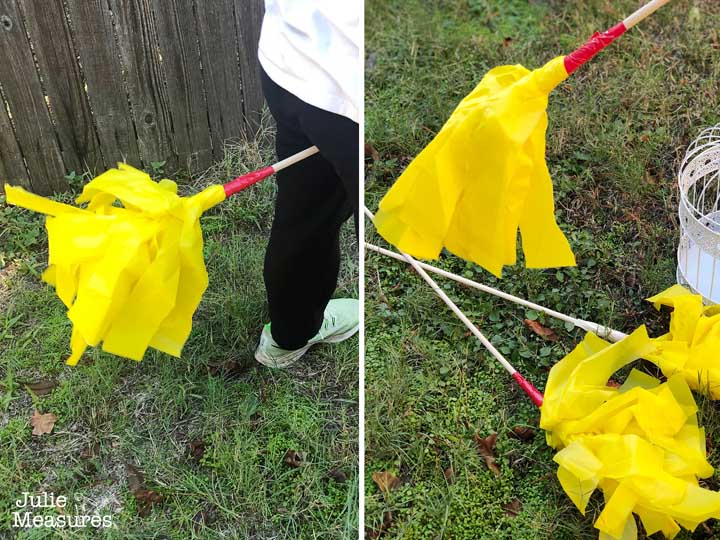 As I was planning our Harry Potter party I knew that broomsticks had to be on the list. 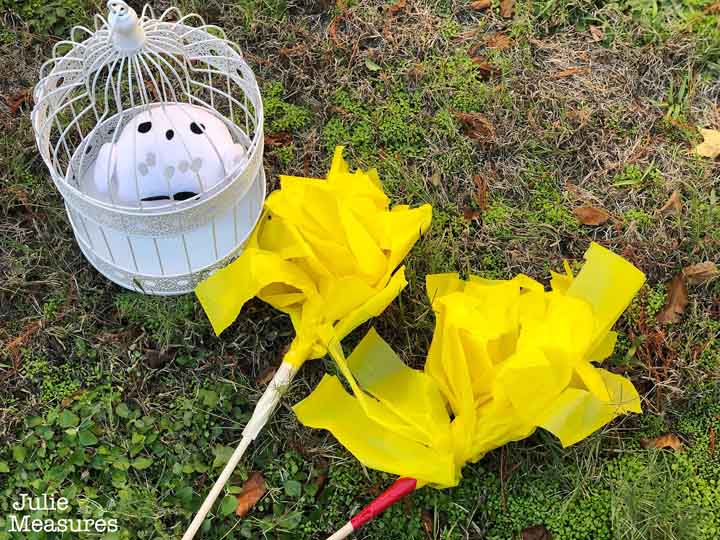 These brooms were probably the easiest of the Harry Potter DIY’s. You’re essentially making tassels to go on the end of the dowels that act as broomsticks.

Start cutting long strips from the plastic tablecloths. I first cut the tablecloth into fourths, lengthwise. Then each of those fourths gets slits cut into it, along the short side. Don’t cut all the way through. Wrap the cut tablecloth around one end of the wooden dowel and secure with the duct tape. 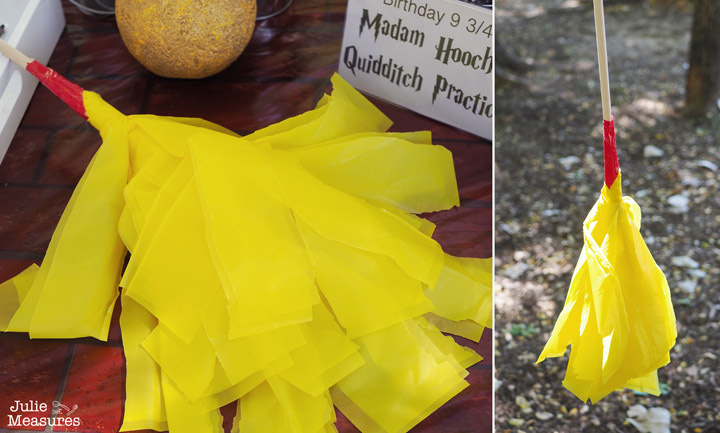 Knowing that we would be playing Quidditch at the party I used two different colors of duct tape, one color for each team. So half the brooms were wrapped in red duct tape and half in white duct tape. 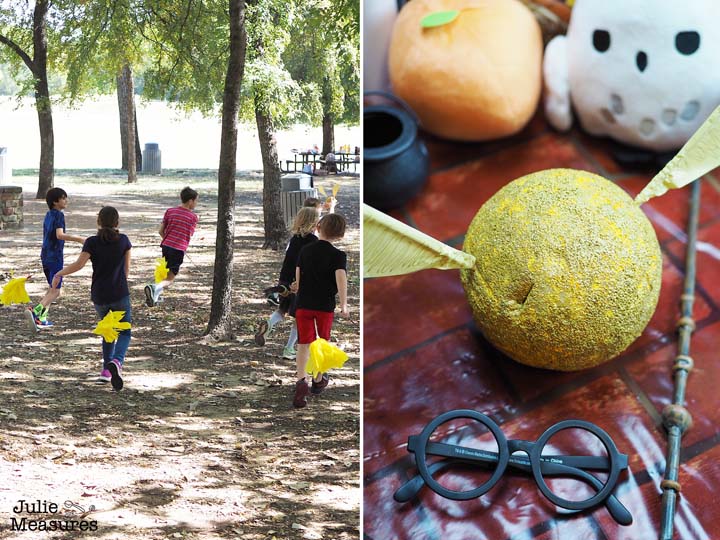 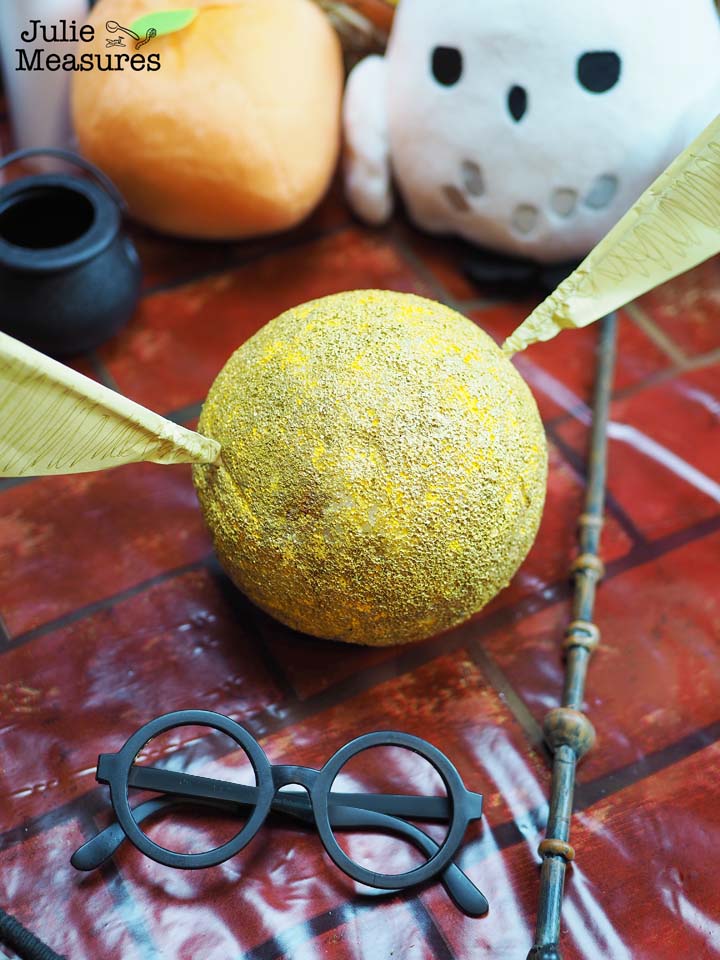 With the broomsticks finished the other key element for playing Quidditch was out snitch. 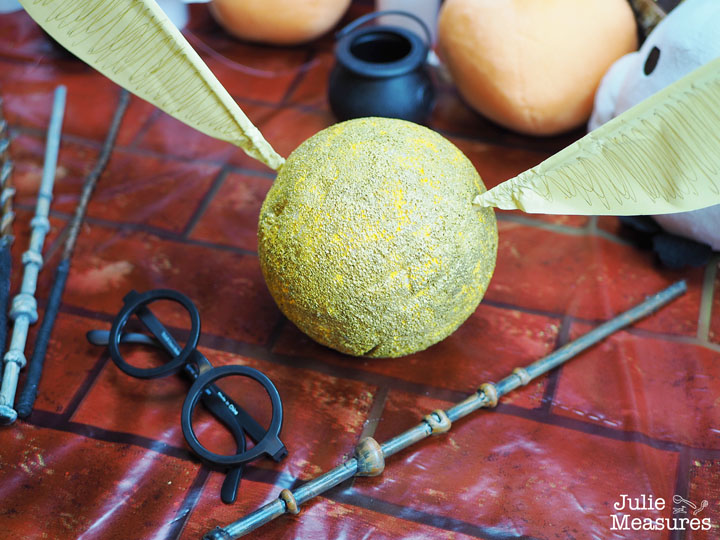 This was actually the same styrofoam ball I used for my DIY New Years Eve Ball Drop. For the Snitch I started by repainting the ball yellow. Then I went over the top with gold craft paint.

While the ball was drying I made the Snitch wings. Cut out the wings from yellow paper and glue them over the wooden skewers. I drew lines on the wings and then inserted them into the styrofoam ball. Our Golden Snitch was ready for the game! 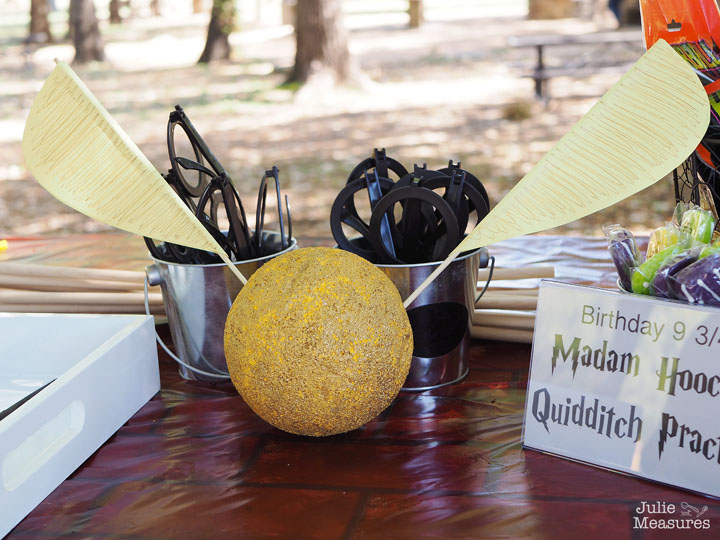 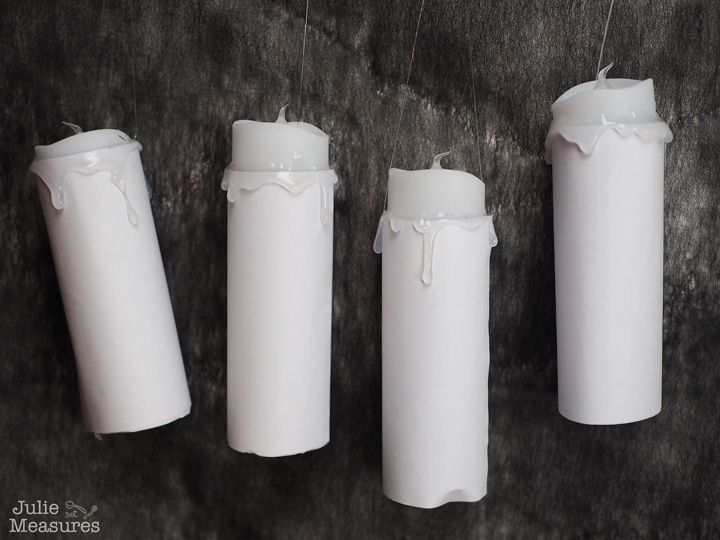 When the students at Hogwarts walk into the Great Hall they are greeted by some floating candles. I knew for our party one piece of decor I wanted to create were those ‘floating’ candles. 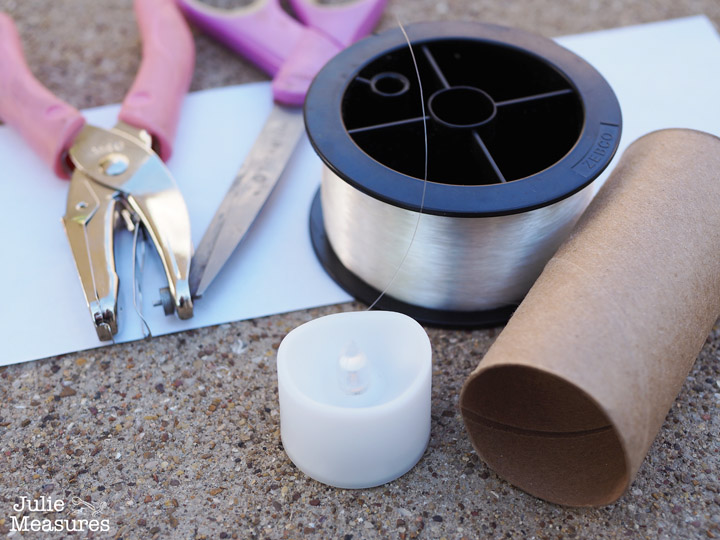 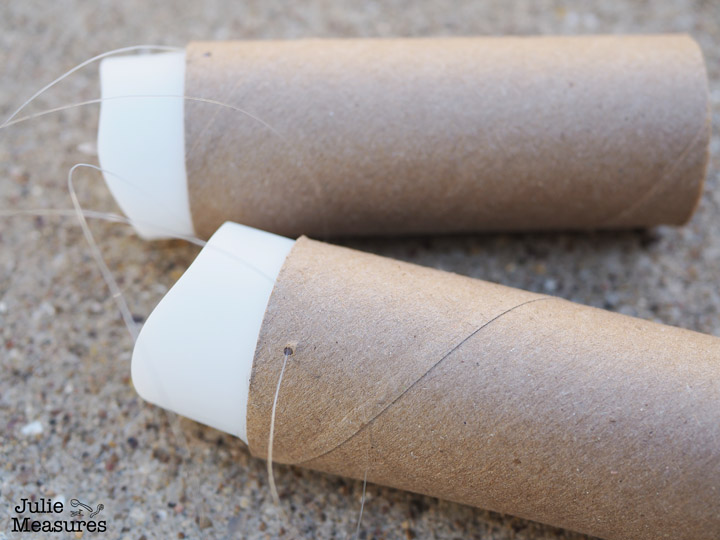 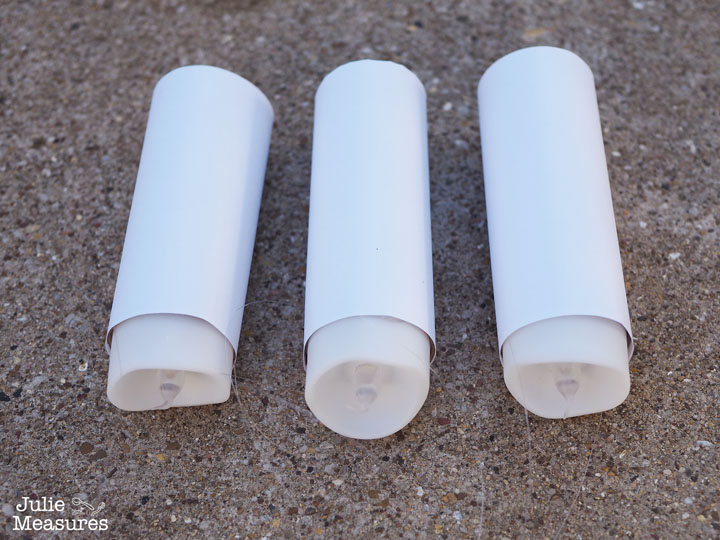 Cut the white printer paper in half length wise. Wrap the paper around the toilet paper rolls and secure with hot glue. 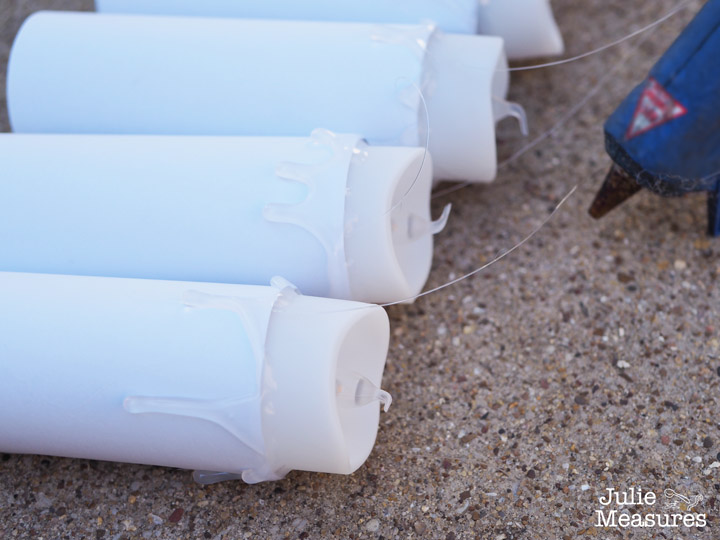 Floating candles need to look a bit melty, right? So I use hot glue around the top of paper to simulate dripping candle wax. 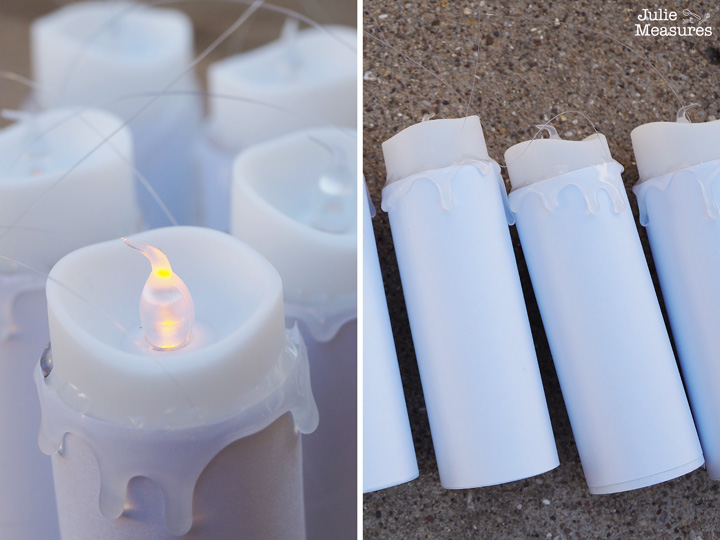 The most difficult part of this DIY is probably turning on the lights. I found that a chopstick works really well to flip the switch on the bottom of the tea light when it’s party time. We had our party at the park so I strung a line between some trees and then hung my candles from that line. 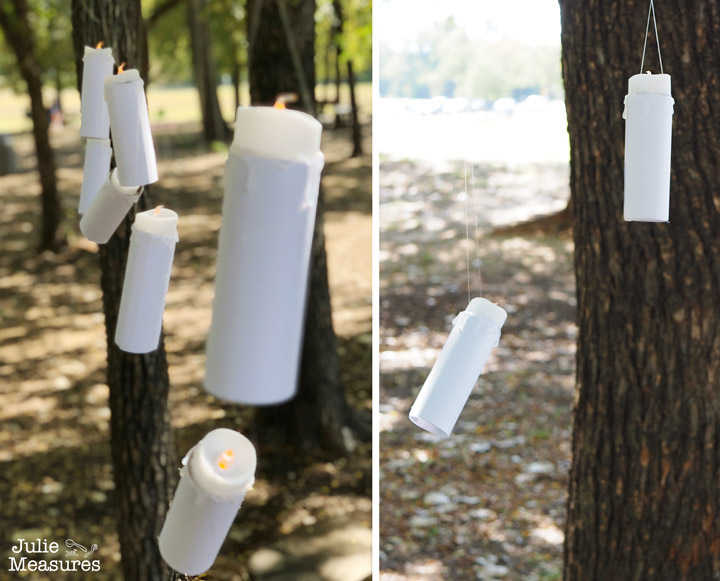 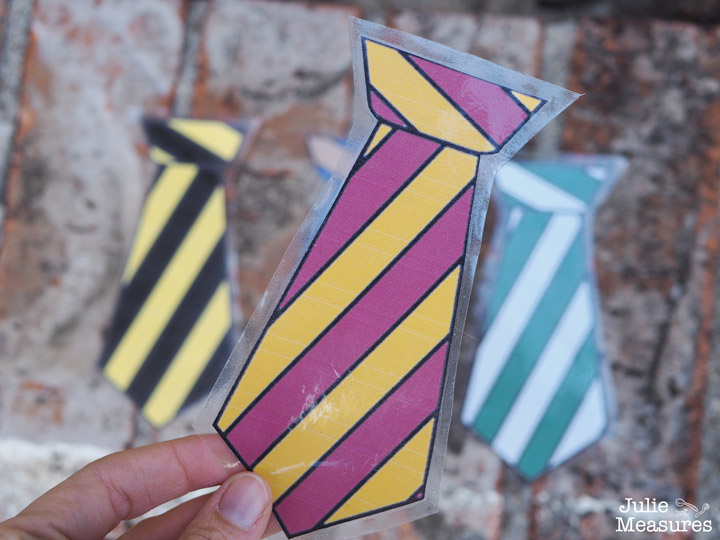 Another fun party activity was sorting the kids into their houses. I made ties representing all four houses.

Grab the image to print your own HERE 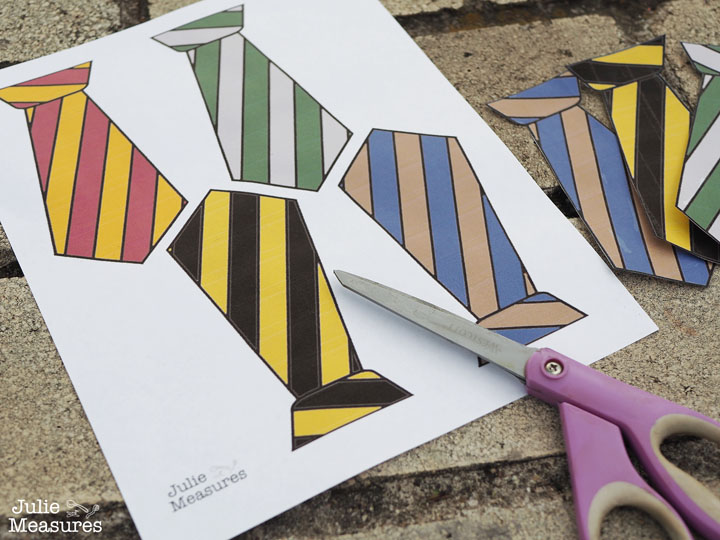 Print out the ties, cut them out, and then laminate them. You can even use clear contact paper for a simple DIY lamination. 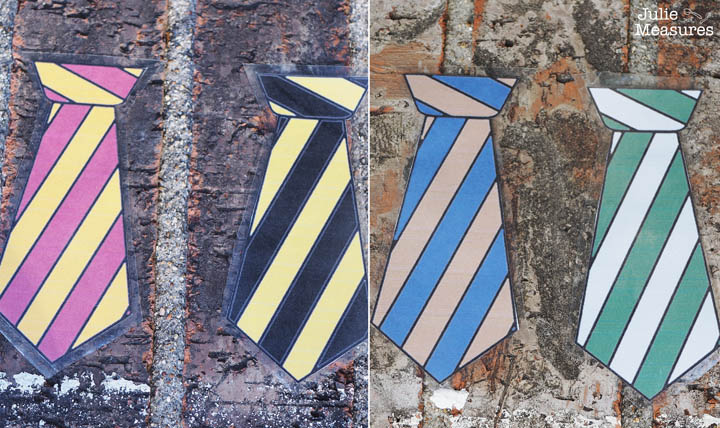 The last step I did was to attach these name badge clips to each tie. 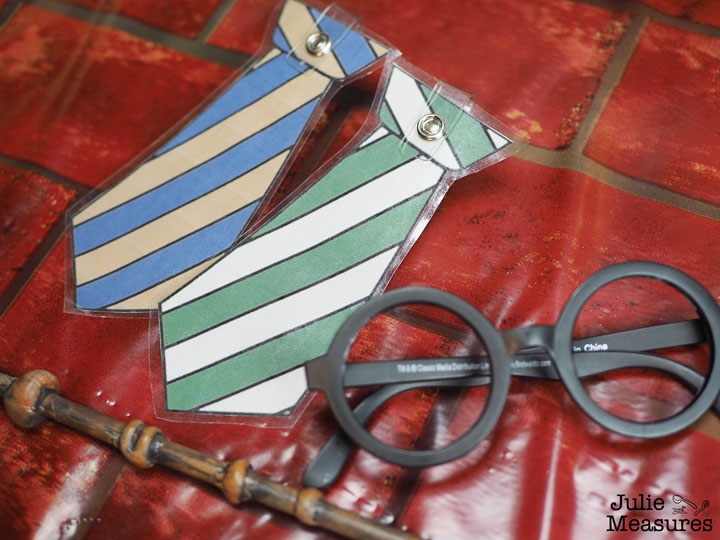 I punched a hole in the top and then snapped on the badge clip. This made it easy to clip the ties to each party goer as we did the sorting. 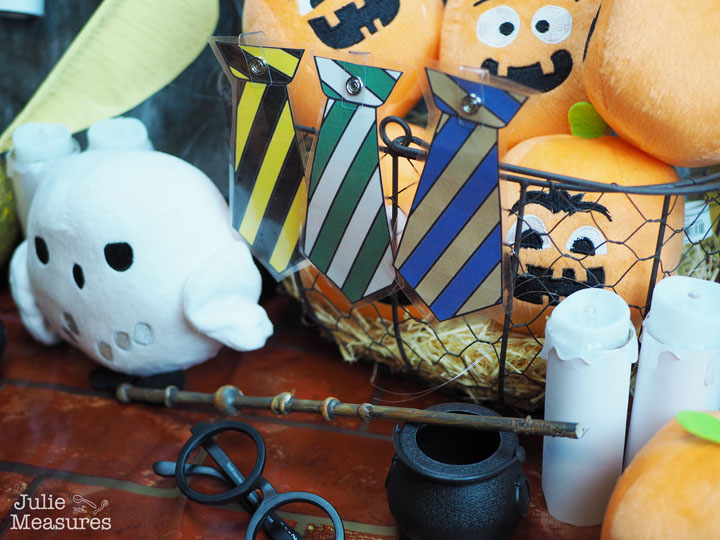 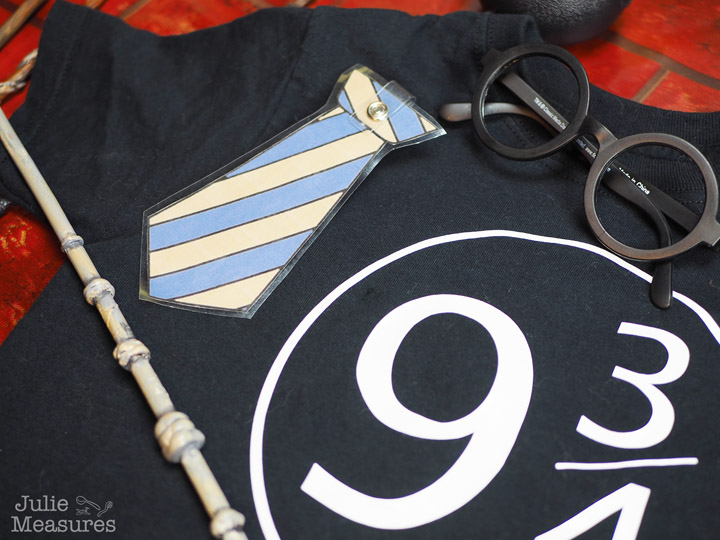 For my birthday boy, I used my vinyl cutter to make this heat transfer vinyl 9 3/4 t-shirt for him to wear to the party. 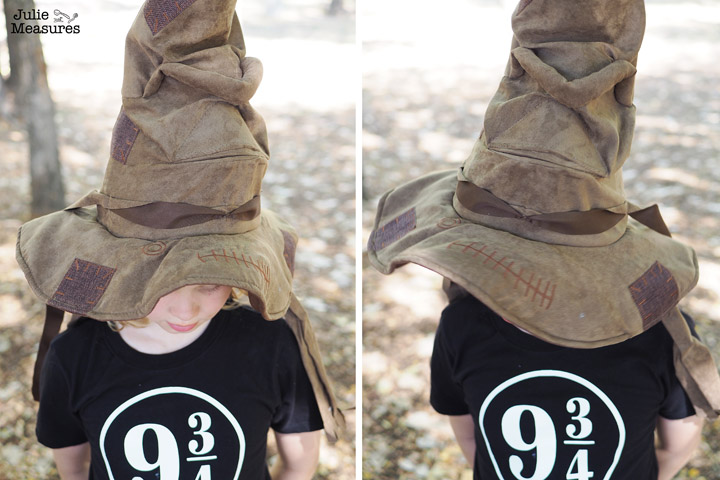 And here’s the sorting hat in action. At the start of the party the kids went shopping in Diagon Alley, picking out their brooms and wands. Then we arrived at Hogwarts for the sorting. After that there were Quidditch games and plenty of Harry Potter treats. Once you’ve made all the Harry Potter crafts, make sure to check out those Harry Potter recipes HERE. 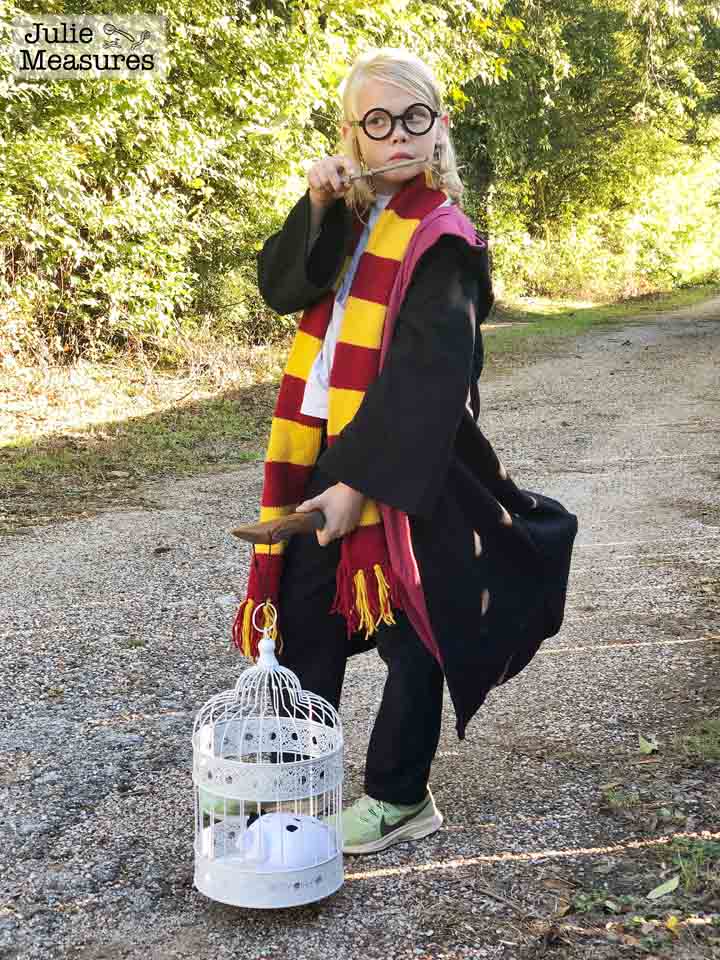