How, and really why, we chose urban parenting is one of the questions I get most often. Here’s the answer, with input from several of my downtown neighbors. 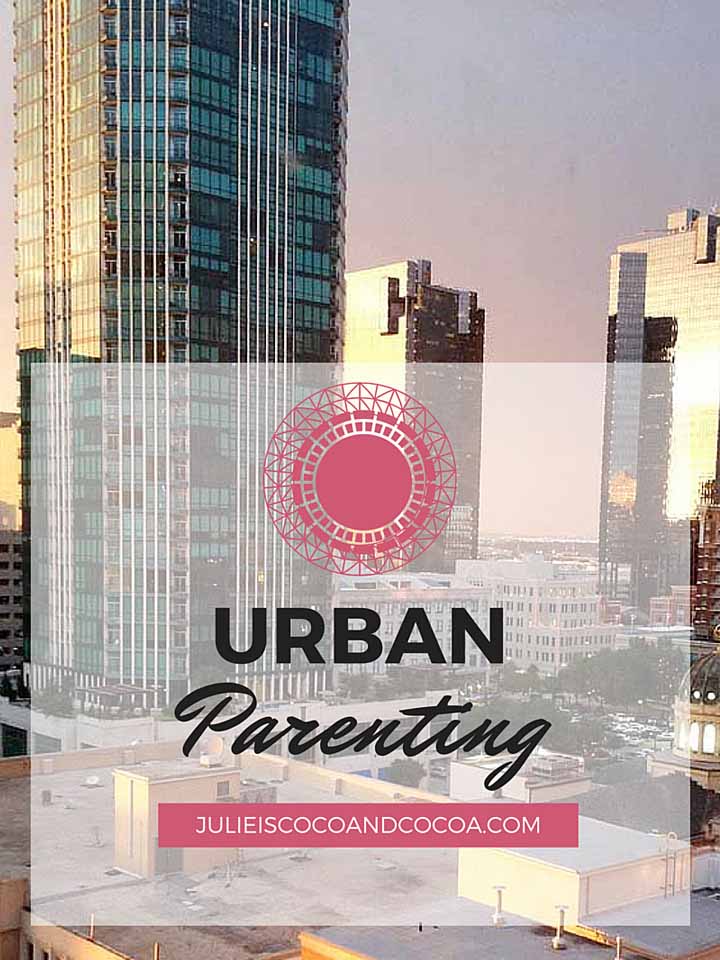 Suburban homes with yards and fences are the norm where I live. So when my husband and I announced that we were moving into a downtown 20 story apartment building with 3 kids, we got some looks.

My husband and I always wanted to live downtown, but we kept saying we would do it after the kids were grown. Finally we thought, why wait? And it’s one of the best decisions we ever made. In fact, with it’s proximity to employment and ample amenities, more and more families are seeing the advantages of moving their families downtown, especially in Fort Worth where I live.

I talked to some other members of my downtown parents group and they all concurred.

Kelly and her husband also moved downtown for work before they had their son, but chose to stay because they enjoyed their downtown neighborhood and condo. Kelly’s son attends the preschool downtown. They are able to walk to school each day.

Schools downtown aren’t just limited to preschools, either. Littlest’s elementary school is within walking distance of our apartment (right at 1 mile). Youngest Twin takes the bus to his middle school.

In addition to schools there are plenty of other amenities downtown has to offer. Ours has ample green spaces, including a park across the street from our apartment building. We frequent several of the neighborhood parks often.

Of course parks and outdoor entertainment aren’t limited just to green space. There is a nearby plaza with tables, chairs, water features, and is pet friendly. It is also home to a certain coffee store, an amenity that many urban parents frequent.

Date nights are much easier since we moved downtown. There is an abundance of restaurants, from casual dining to upscale choices. And many are family friendly and accommodating to large strollers.

It’s not just parents who can living downtown with kids. Susan is a downtown grandparent. She moved to Fort Worth to help with her grandson, who she watches Monday through Friday. Susan says she does something with her grandson every day. They use the Water Garden, walk to the plaza, go to the park and enjoy weekly hour at the Central Library. On warm days Susan says that they use the pool at her apartment and play in their courtyards. With public transportation it’s easy to take a bus to the nearby zoo and art museums.

“I really believe downtown is very fun for kids and grandparents”, said Susan.

We have prime viewing for fireworks that we can watch from our apartment window. As well as parades, festivals, and the many other downtown events.

“We participate more in downtown FW more than we ever would if we didn’t live downtown”, said Kelly.

Becky added that, “We love living downtown and we feel it has more advantages than being in suburbia.”

Becky is pleased with the ample sidewalks and street signs downtown and feels that her daughter will be able to ride a bicycle there someday. In fact, we are lucky living in Fort Worth that it is a bike friendly city, with families often seen riding together. The mayor of Fort Worth is known for taking bike rides with Fort Worth citizens.

Of course no living arrangement is without a few challenges. In addition to a son Kelly is also a pet parent. “We have to get both the dog and the child out the door multiple times a day irrespective of weather,” said Hunter. “It’s also not great to not have any place where our son is free to explore outside without constant supervision.”

The Downtown Fort Worth YMCA strives to be a family friendly environment for urban parents. They offer child care hours for parents to exercise and host nights out where parents can pay to leave their children there.

With more parents and grandparents moving to downtown Fort Worth a group was recently formed to address the unique concerns of the demographic.

The group is open to downtown parents, grandparents, kids, and caregivers. The purpose of the group has been to connect and plan play days for the kids who live in the area.