Creating a Roman soldier costume? Turns out it’s really easy to knit your own chain mail! See how I used knit chainmail to create Roman Soldier costumes for a Nativity story. 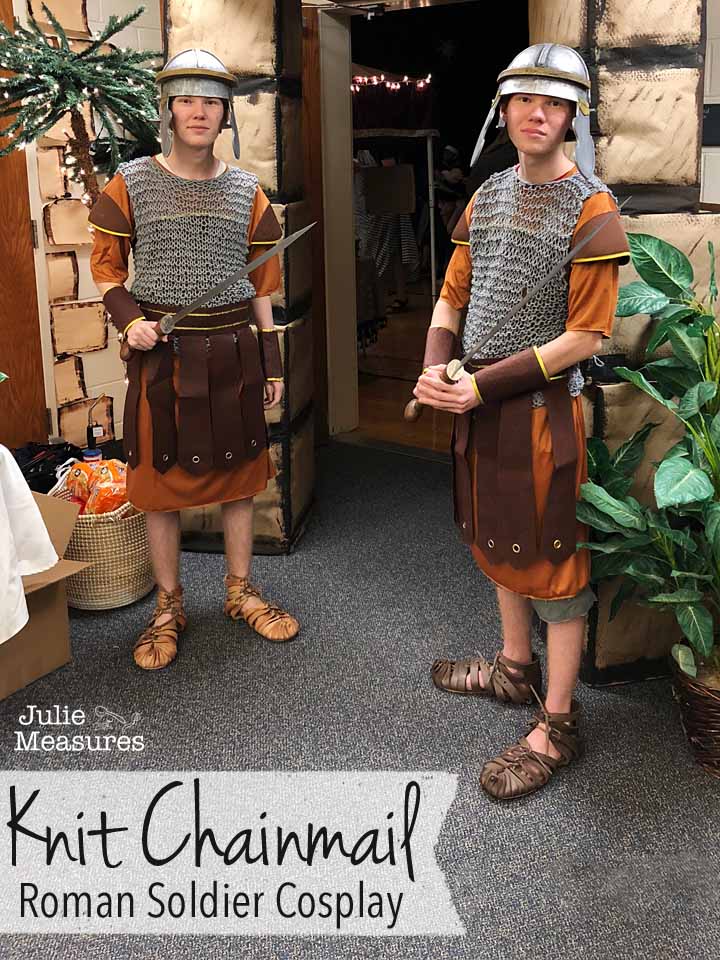 You know in Love Actually where Karen (Emma Thompson) is told by her child that she’s going to be a lobster in the Nativity play? I think I felt a little similar when creating some Roman soldier costumes this year.

We were invited to attend a Night in Bethlehem activity for Christmas. There was dinner, a telling of the Nativity story, and some singing. They served pitas with meat and vegetables, olives, dates, and grapes.

Each family that attended was asked to decorate different areas of the event. Our family was asked to create the entrance to the city and, specifically, for the twins to dress as Roman soldiers. While creating Roman soldier costumes for a Christmas activity was a new experience for me, we all jumped in for the fun. 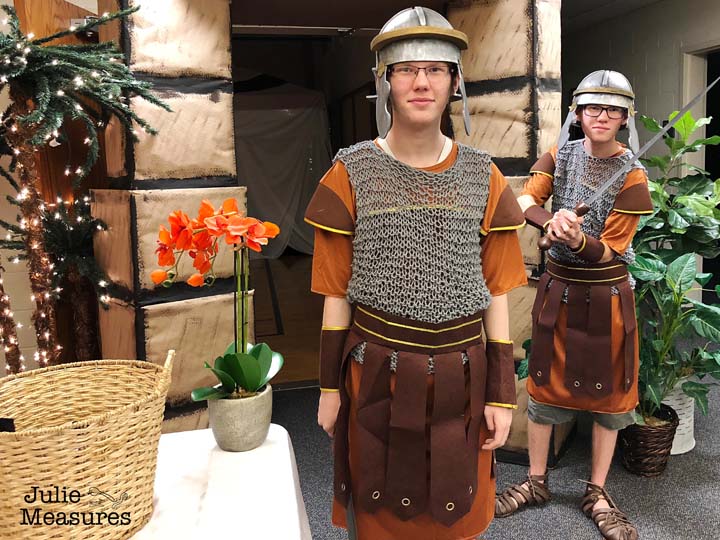 Invitees were each asked to bring a non-perishable food donation as part of the event. At the entrance they turned in their donation, their taxes, and then were allowed through the gate by our Roman soldiers. Not only did we create the soldier costumes, but we were also in charge of decorating the entrance. We used boxes wrapped in brown paper and then painted to look like stones to create our gateway. The twins had a blast ‘guarding’ the gate. 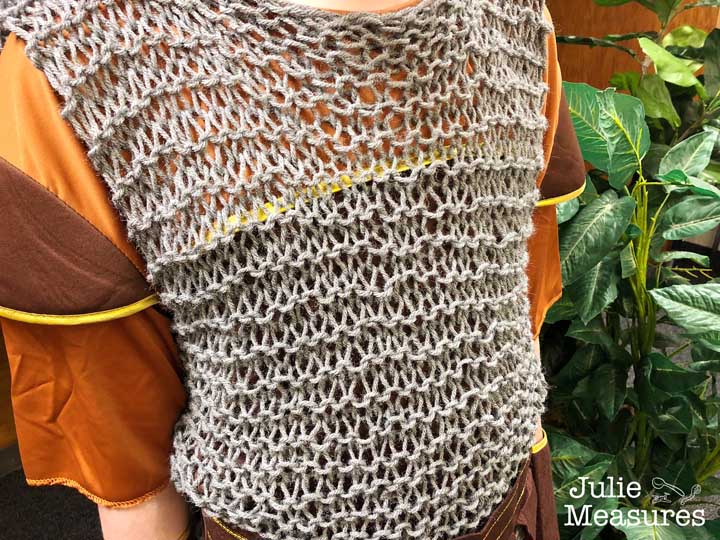 The costumes. My part of creating the Roman soldier costumes was knitting the chain mail. This involved some medium/worsted weight yarn and size 19 knitting needles. (Which also happen to be the biggest size that I own.) The chain mail tunics are two large rectangles knit in garter stitch. Measure the chain mail wearer and then add a couple of inches. Divide that number in half and make each rectangle that width. Knit the rectangles to be long enough to reach from the shoulders to the hip bone. 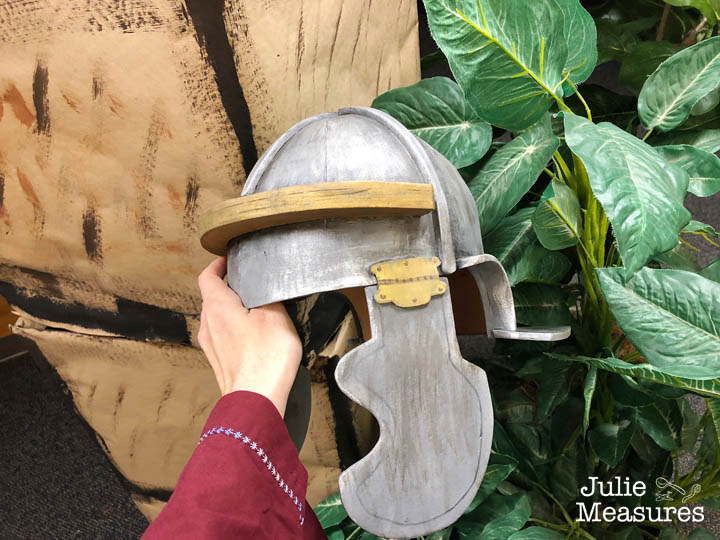 The knit chain mail wasn’t the only part of the costume that we made. My husband molded the twins helmets out of foam. Yes, large foam sheets are what those helmets are made from. Even the metal ‘hinge’ on the side is made from foam. The various pieces were painted and assembled. 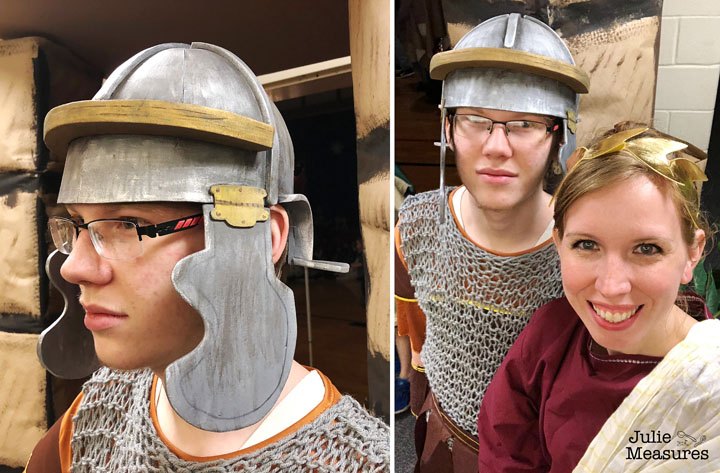 My husband also created cosplay resin cast swords for the twins Roman soldier costumes. He actually makes similar swords in his online shop. They certainly added a feel of authenticity to the costume, and all the other kids thought they were super cool. Since they are plastic they were safe and perfect for this family friendly activity.

Don’t worry, these are cosplay swords, made of plastic, and won’t withstand any actual blows. 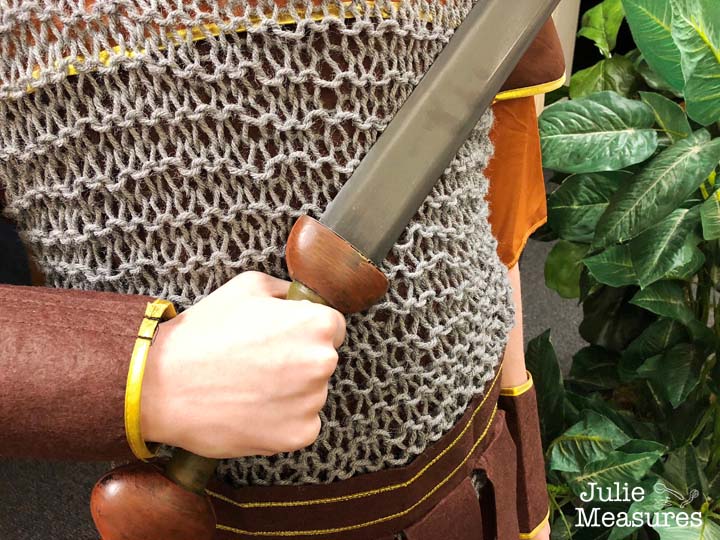 The hats weren’t the only part of the costume that was made out of foam. Their ‘leather’ sandals are also foam. Several layers of foam sandwiched together for the soles. Then strips folded, hole-punched, and laced together to create the tops.

Seriously, they had so much fun with these costumes. They are already asking if they can wear them for Halloween next year. 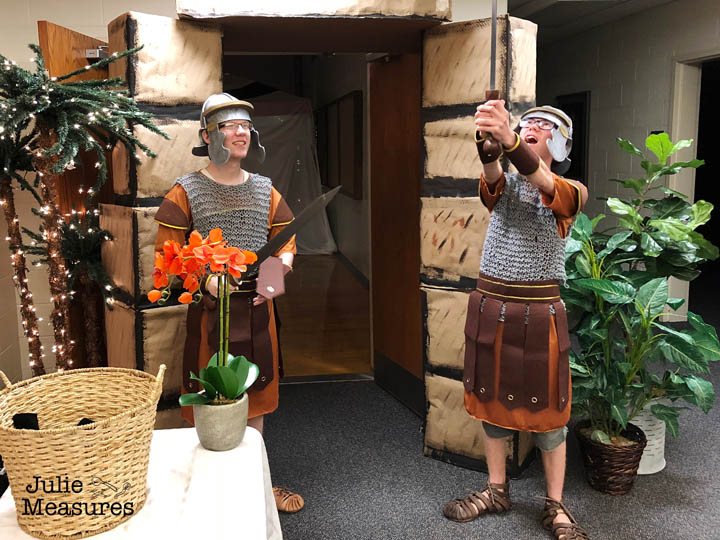 Plus, I loved how involved it made them with the whole event. And, since we made their costumes, they loved telling people about the various pieces, how they were made, and who made them. 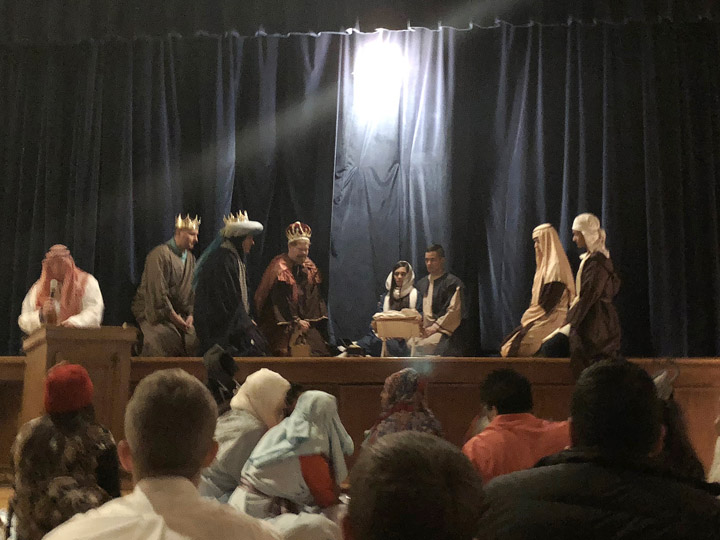 From our family to yours, wishing you a very Merry Christmas and a Happy New Year. 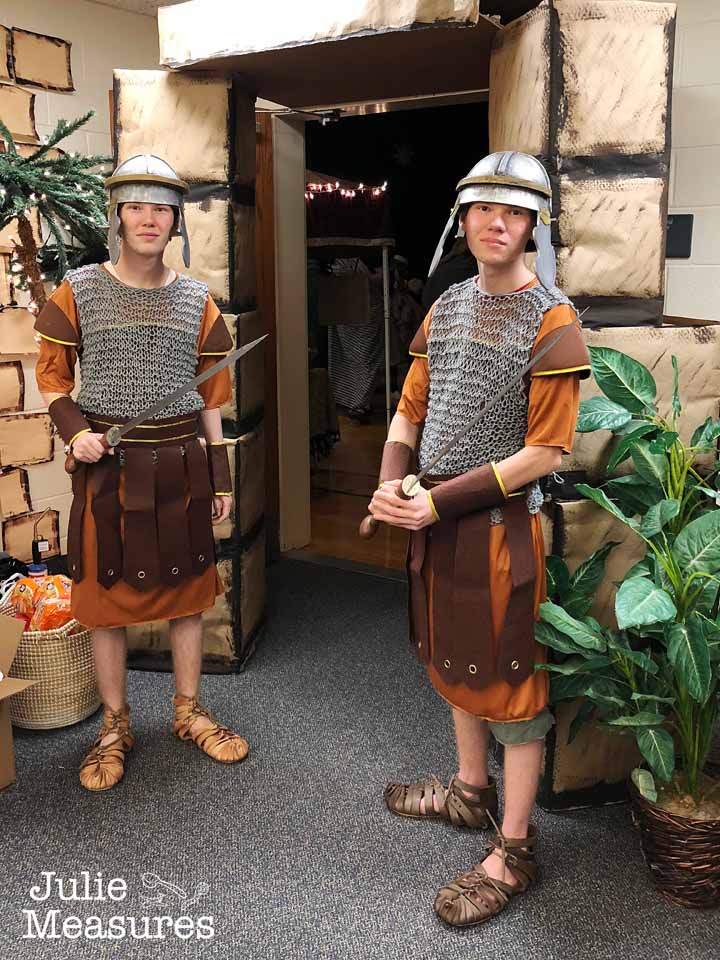 I can’t wait to share more knitting patterns and other creative ideas with you next year!