This post is part of a social shopper marketing insight campaign with Pollinate Media Group® and Universal Pictures Home Entertainment , but all my opinions are my own. #pmedia #DowntonAbbeyAtWalmart  http://my-disclosur.es/OBsstV
Gather your friends for a Cream Tea worthy of the Queen! Downton Abbey inspired Cinnamon Scones Recipe with Clotted Cream and Jam 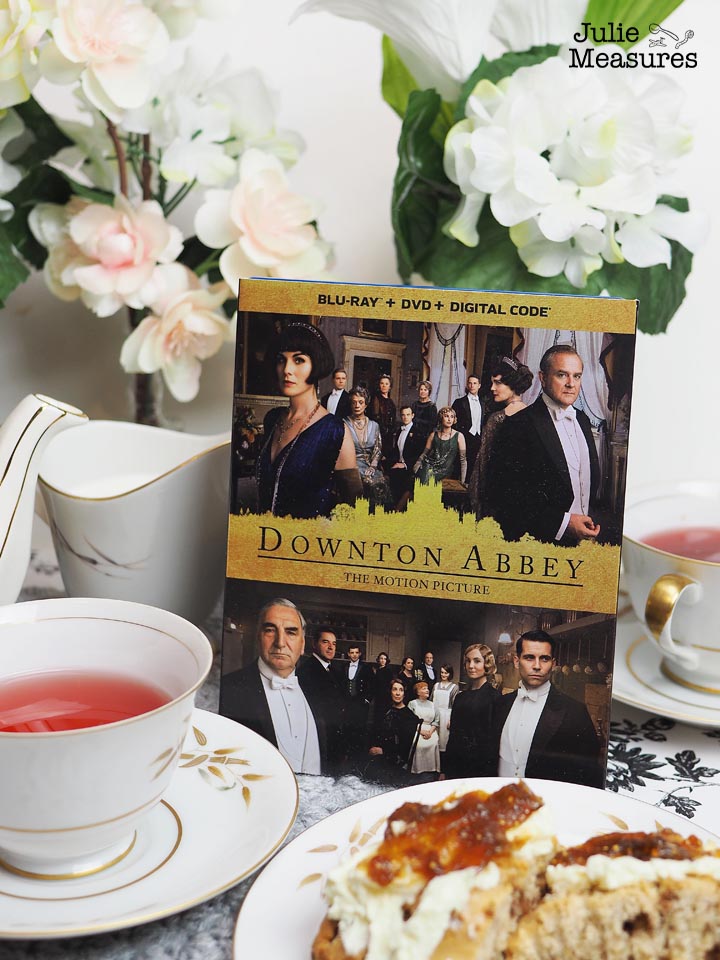 If I’m naming shows where I have seen every single episode, more than once, Downton Abbey is near the top of that list. The characters, the scenery, the costumes, I love it all.

And when they announced the movie? Of course it’s even grander than the show. Not only are all the characters that you love are back together, but they are getting a visit from the Queen.

I have been to Buckingham Palace, but it was years ago and we could only stand at the gates and look in. It’s actually one of my favorite stories. I was in high school when my parents took me and my two younger sisters to England and Belgium. My youngest sister was only 5 at the time and was incredibly excited to go to Buckingham Palace. That is until we got there and she realized we were merely standing at the gates. There is a picture of me, my Mom, and my sisters, with my youngest sister looking rather put out that the gates were as far as we could go. 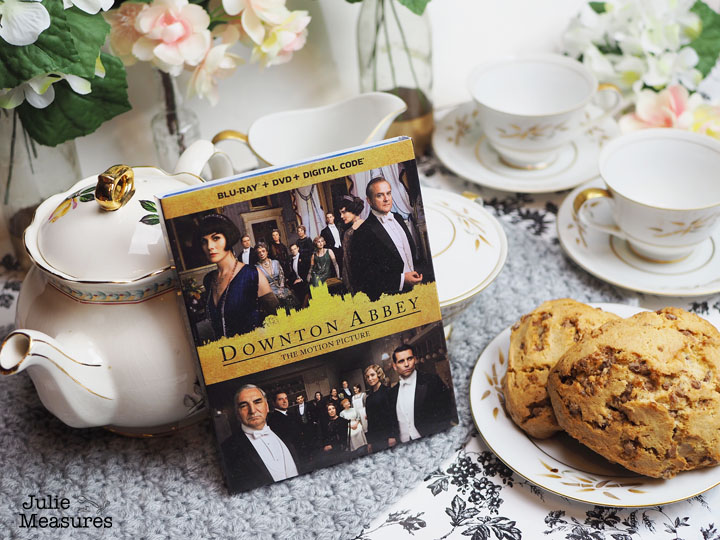 Now, during certain times of the year, not only can you visit inside Buckingham Palace but you can even have tea there. I’m slightly very jealous that my Mom and Aunt have enjoyed tea at Windsor, Buckingham Palace, and even visited Downton Abbey. Even though I have yet to enjoy tea at Buckingham Palace or Windsor I was inspired to make my own cream tea service at home. 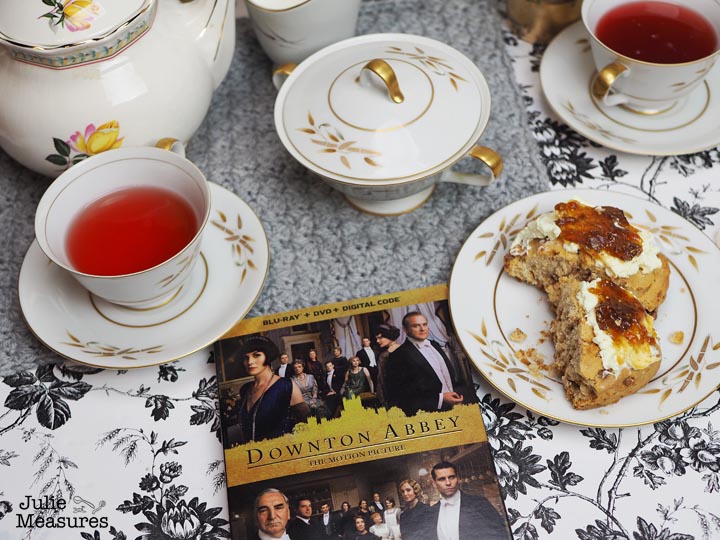 Taking a cue from the DVD, which is an expansion from the series, I put together a movie watching night complete with cream tea service fit for a visit from the Queen. 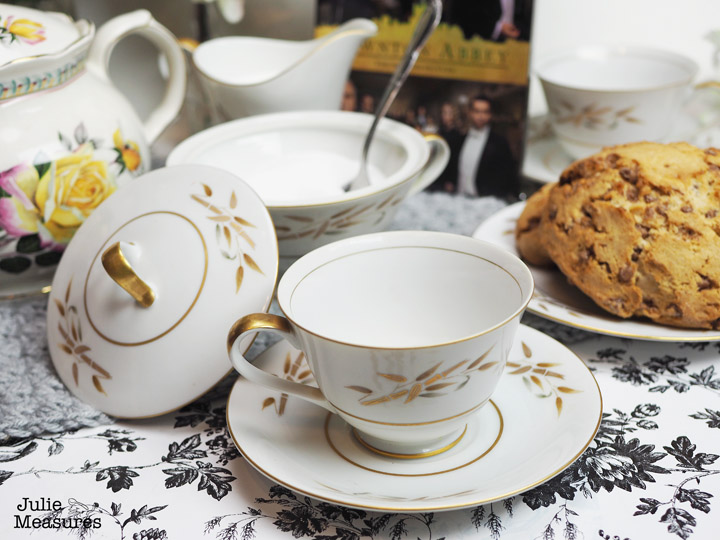 I started by brewing a beautiful hibiscus tea. I thought the color was gorgeous and would be perfect for a party. 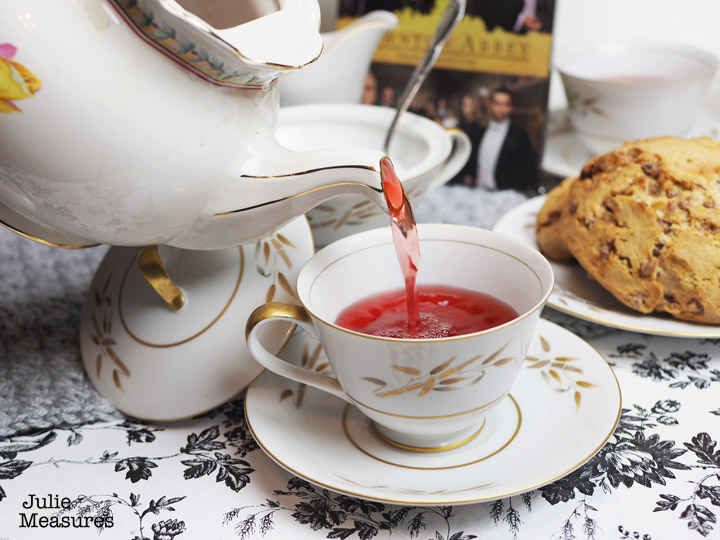 Since this is a tea that needs to be fit for watching Downton Abbey, I’m serving it with milk and sugar, just like they do in England. 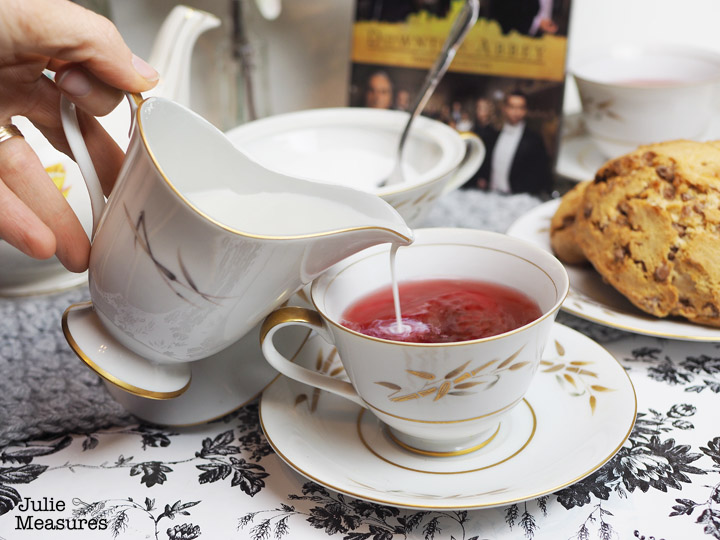 A High Tea would consist of tea and finger sandwiches, but a cream tea, which is what I’m serving, is tea and scones. 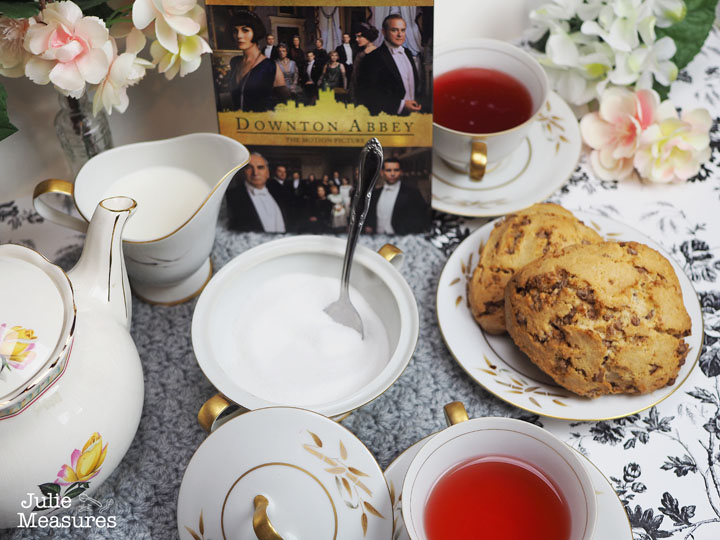 This time I made some scrumptious cinnamon scones that I think would make Mrs. Patmore (the cook at Downton Abbey) proud. 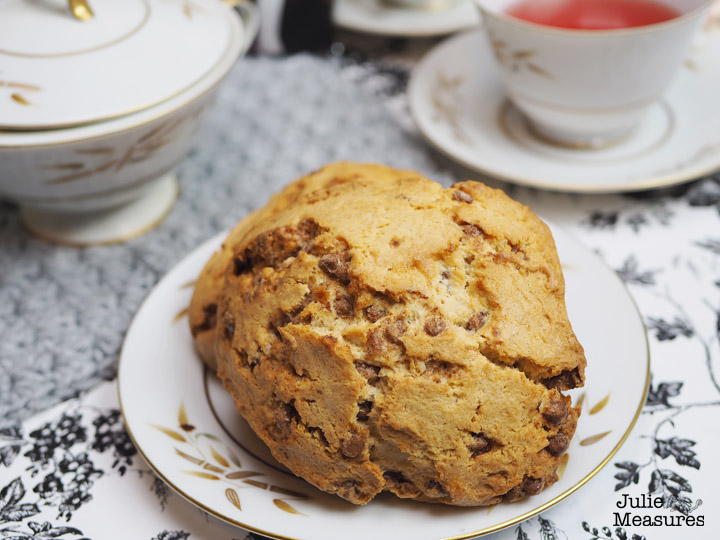 I like my scones served warm and they must be topped with clotted cream and jam. 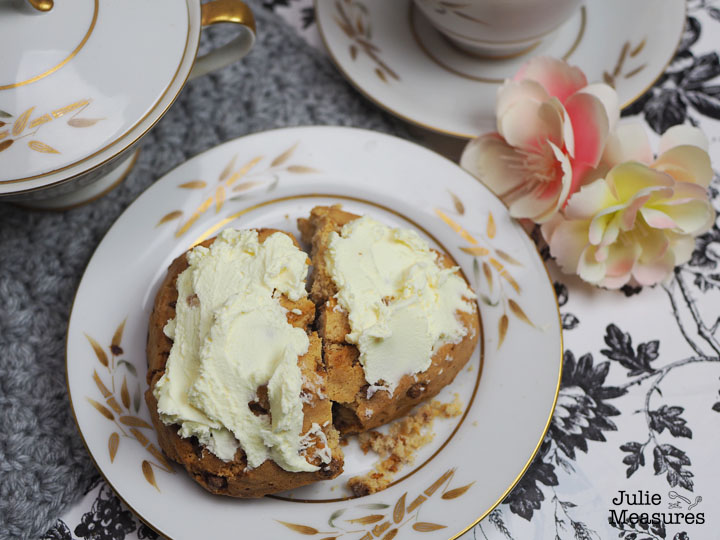 There is a bit of debate over the layering of the clotted cream and jam. Some put the clotted cream down first and then the jam, but others put the jam on bottom and the cream on top. However, traditional etiquette suggests the scream should be spread on a scone first, so that’s what I’ve done. (And it’s how I prefer it.) 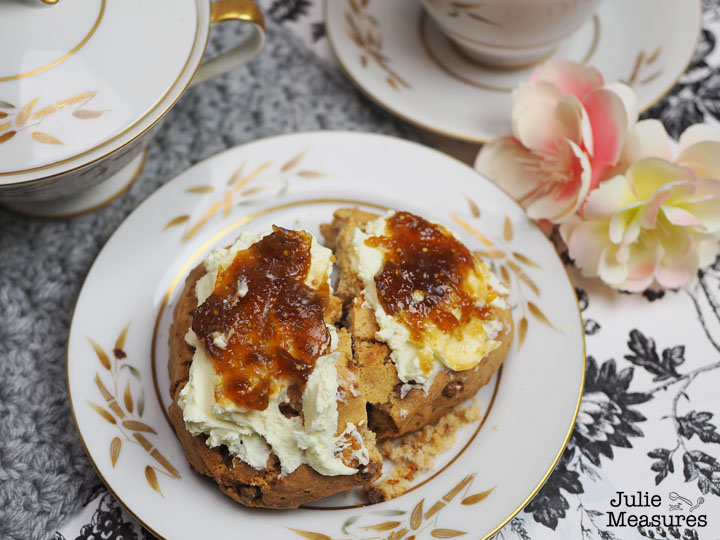 For my Cinnamon scones I’ve tried an unusual pairing, and I have to say it’s pretty magnificent. I was trying to think of something a bit decadent, a little out of the ordinary. I typically gravitate to a lemony or berry jam, but to go with my cinnamon scones I picked up a fig spread. Something about the cinnamon and fig together is fantastically delicious and I highly recommend it. 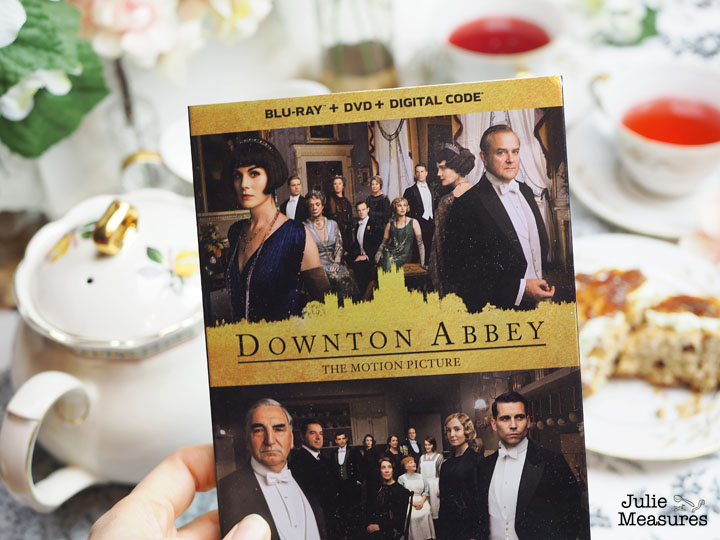 I feel like the pairing is elevated enough that even Mary and Carson would approve as well. 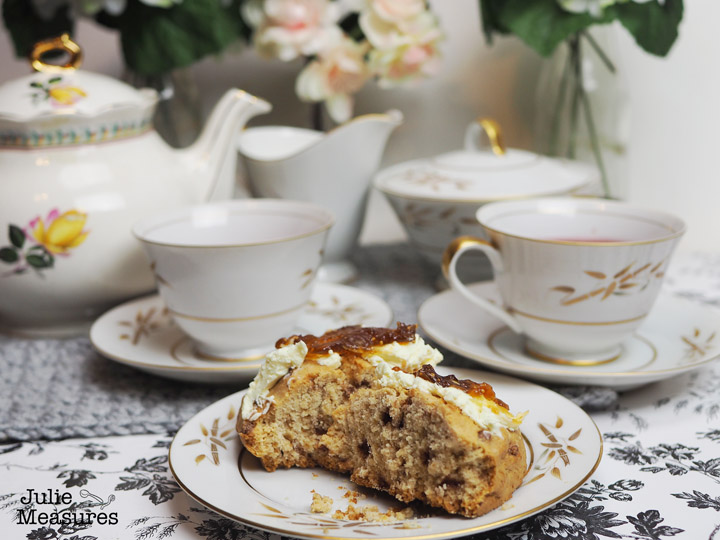 I picked up everything I need for my Cinnamon Scones Recipe at Walmart. The DVD is available at Walmart and on Walmart.com

Head to Walmart and purchase the new release of Downton Abbey DVD today! 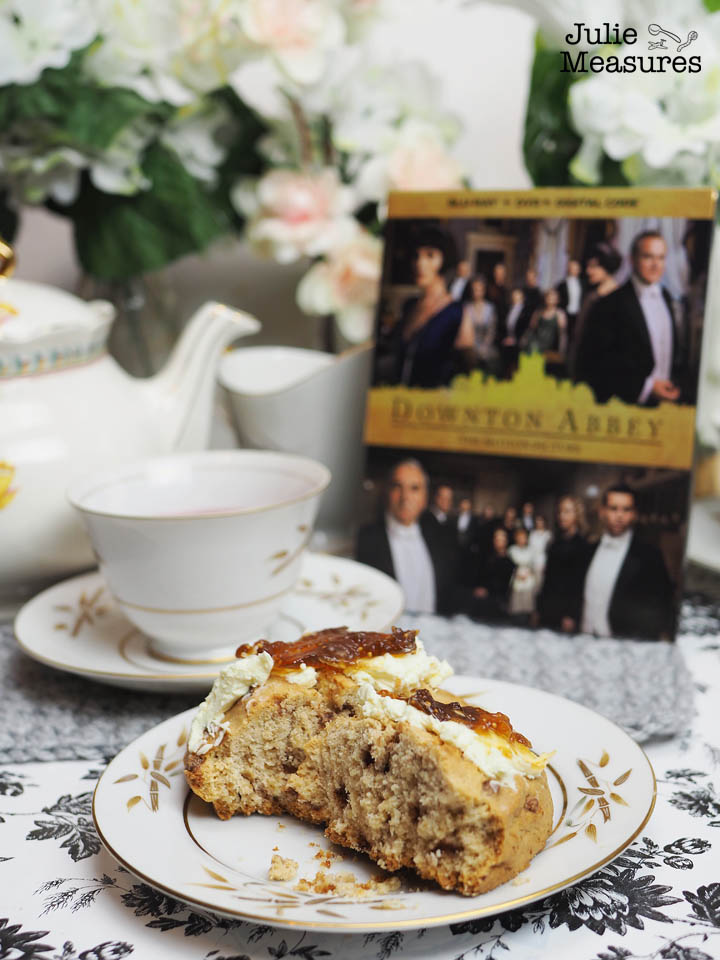 Ready to host your own Downton Abbey movie night? Don’t forget the Cinnamon Scones Recipe, jam, and clotted cream. Your guests will love it! 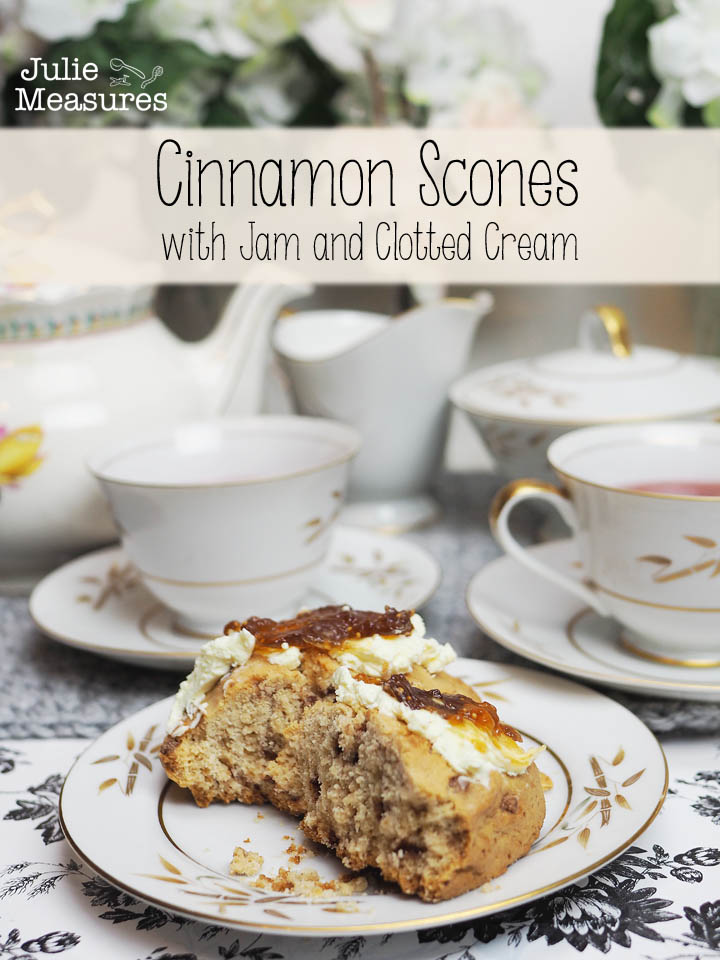