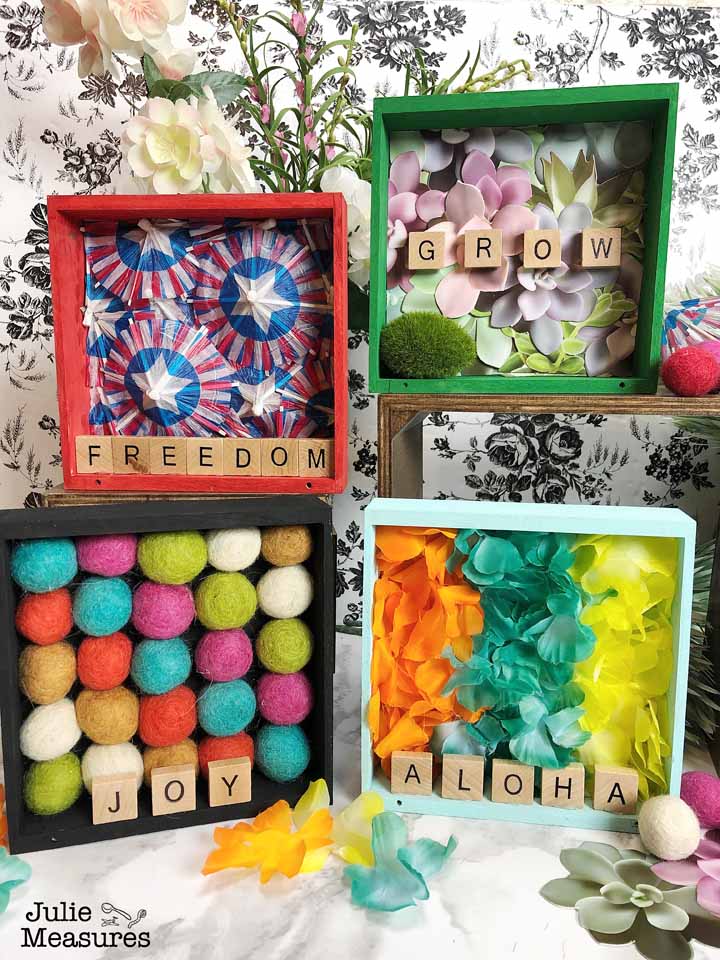 Do you pick a word of the year? It’s something I do each January. I even love to incorporate my word into my vision board, I find it helps me center my goals and focus for my vision board.

Are you looking for shadow box ideas?

Having inspiring words around the house is something I really enjoy. And those words were the inspiration for these shadow box crafts. 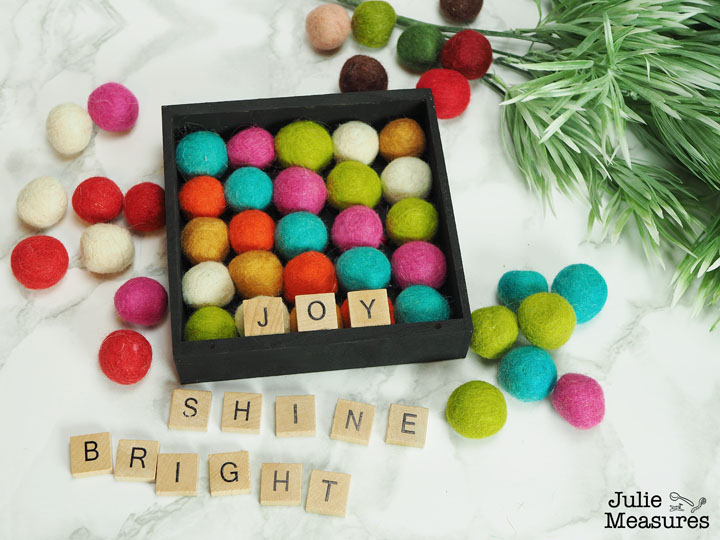 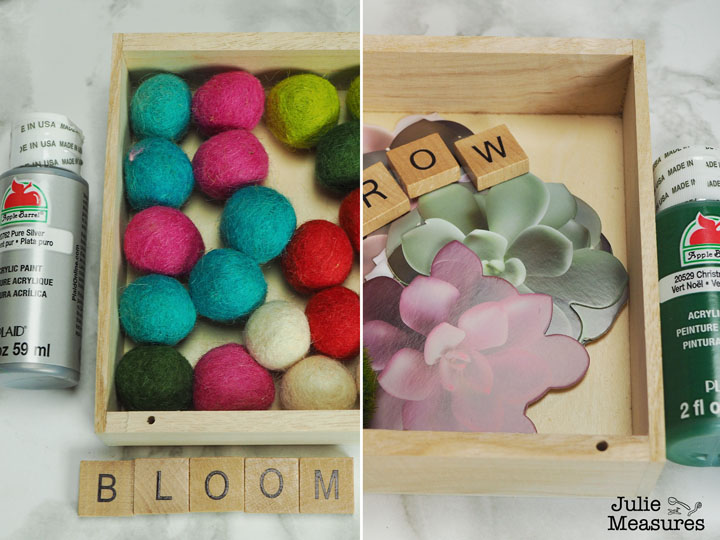 I gathered up a variety of craft supplies to serve as the background elements for my shadow boxes, pairing them in a theme with the different words I chose. 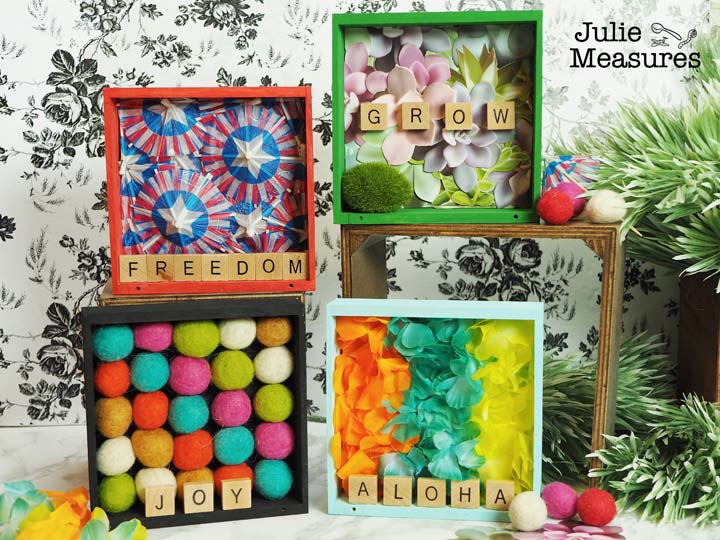 How to Make Shadow Box Crafts

The first step was to paint each shadow box frame and let it dry completely. While it was drying I could prep the interior background pieces. Some of the boxes, like the felt pom-poms in the Joy box, were easy. I picked out colors and created a pattern. Other boxes, like the Grow, Freedom, and Aloha boxes needed a little more work. 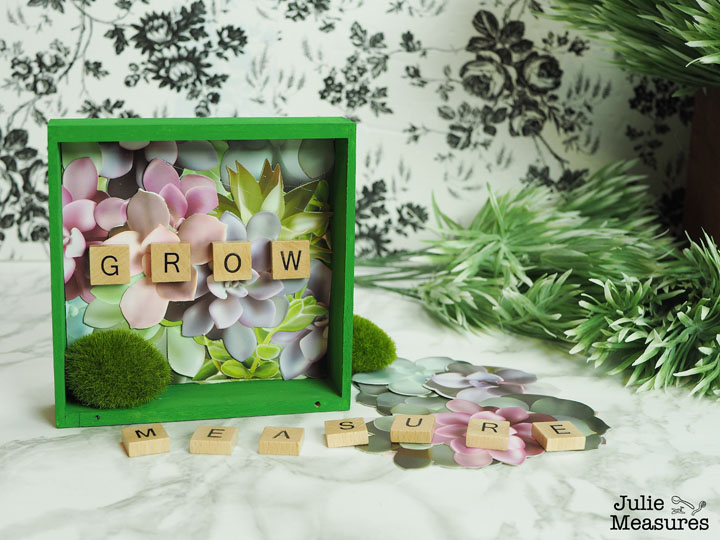 The background for the Grow box were some cardboard succulent cutouts that were originally part of a wreath kit. Obviously cardboard in the shape of plants don’t neatly fit into a square box. So my first step was to cut some of the succulents in half making a straight line. I glued these pieces along the interior perimeter of the box as the base layer. Then I started stacking additional pieces on top until I was happy with my design. I did trim down some of the additional pieces as well to make them a bit smaller so I could incorporate more colors. 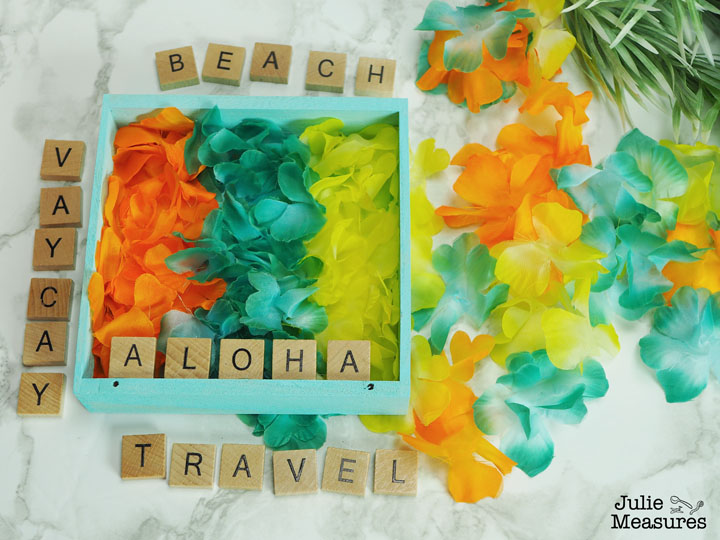 These colorful flowers seemed very tropical to me. Since Hawaii is at the top of my list for big trips I knew I needed an Aloha shadow box for my desk. These flowers were originally part of a garland, but I also used flowers from a lei for another box. First I cut the garland (and lei) to get all the loose flowers. Then I used a ruler to mark off three equal sections in the box and then attached the flowers using hot glue. Personally, I loved the look of the three sections, but you could also have all the flowers mixed together for a different look. It depends on the flowers you choose. 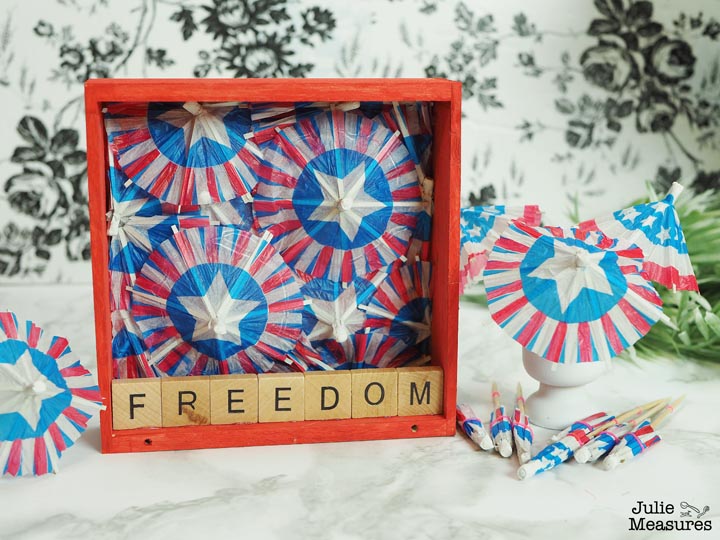 The freedom box might have been the most challenging. My family loves the 4th of July and all of the traditions we have that go with it, so I thought it would be fun to add to my summer decorations. For this box I used some drink umbrellas. How do you glue drink umbrellas into a wooden box? The big tip is that you’ll need to break or cut off the stand/stick portion of the umbrella. I used hot glue around the edge of the umbrellas to glue them down.

Similar to the grow box, gluing round objects into a square box needs a little additional work. Just like the succulents I also cut some of the umbrellas to create straight lines. I glued four round umbrellas into the box first. Then I glued the cut pieces around the interior perimeter. Finally, I added more round umbrellas on top. 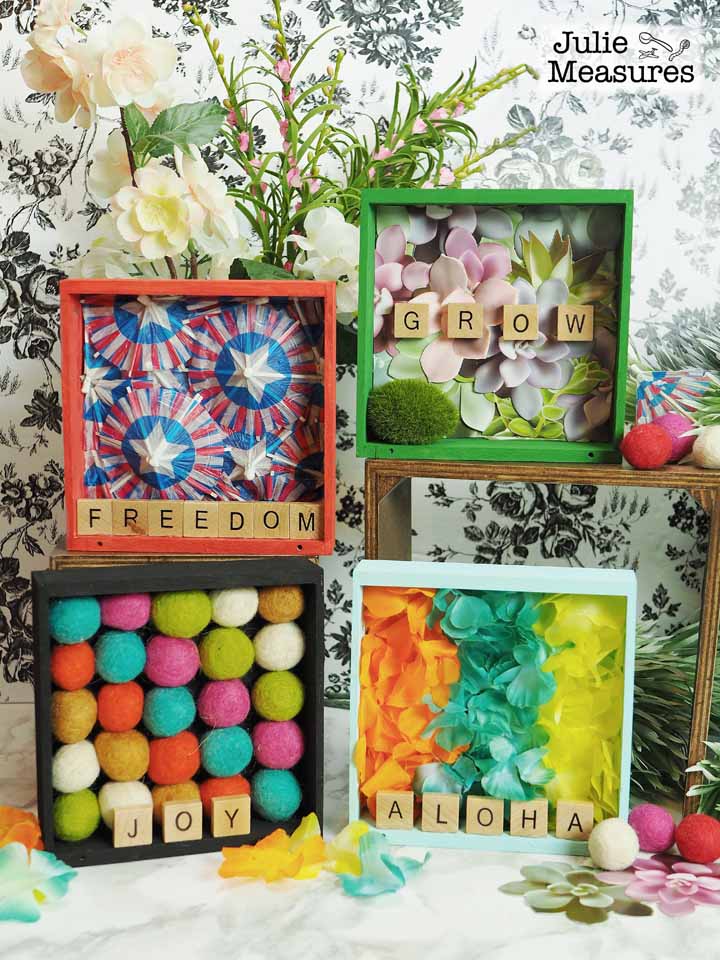 Thanks to Oriental Trading for providing the supplies for my Shadow Box Crafts.
Follow me on Instagram for codes to save on all of your shadow box craft supplies!