Taking a trip to Kansas? Enjoy Tanganyika Wildlife Park and all the Family Friendly Activities in Wichita 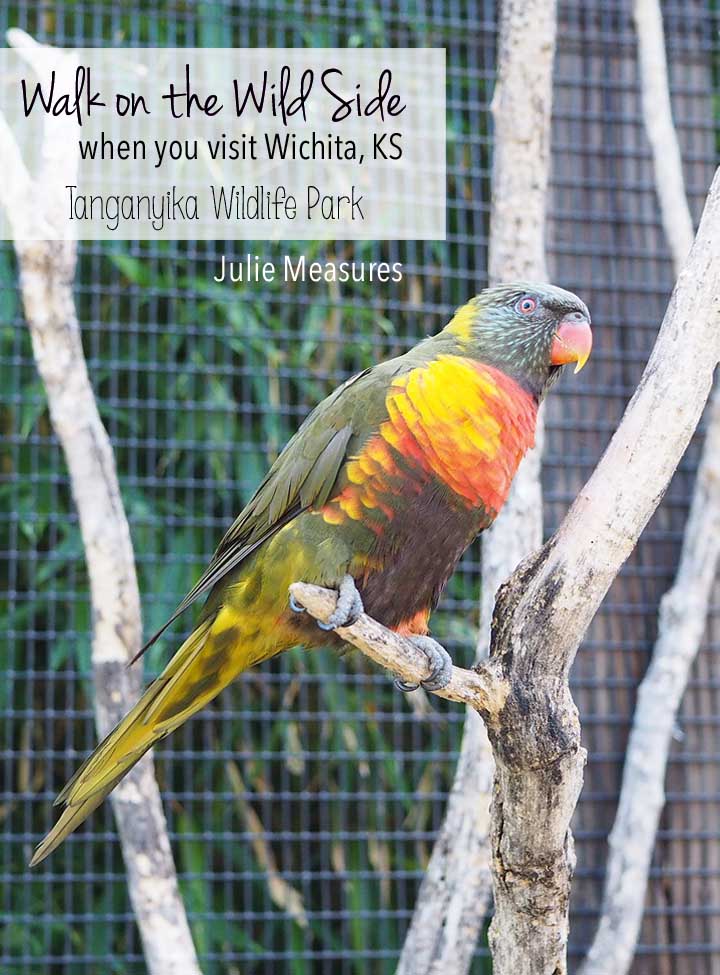 I love taking our kids to the zoo. Getting to see the animals and learning about their habitats is one of our favorite activity. I’m always amazed at the types of questions my kids ask the keepers, more insightful than what I would think of, and how much they remember visit to visit. While we have done a few animal feedings before, nothing compares to the experience we had at Tanganyika Wildlife Park.

Our family vacation to Wichita was filled with family friendly activities, from science museums to parks, a wide range of restaurants, and our family friendly accommodations. But a highlight for us was the the animal experiences at Tanganyika.

After getting our tickets and animal encounter wristbands we took a look at the map and made a plan for the animal experiences we wanted to visit. You can choose the number of encounters you want and then pick and choose which places to visit. While you can see all of the animals, some of the feedings and activities do require one of your encounter uses. 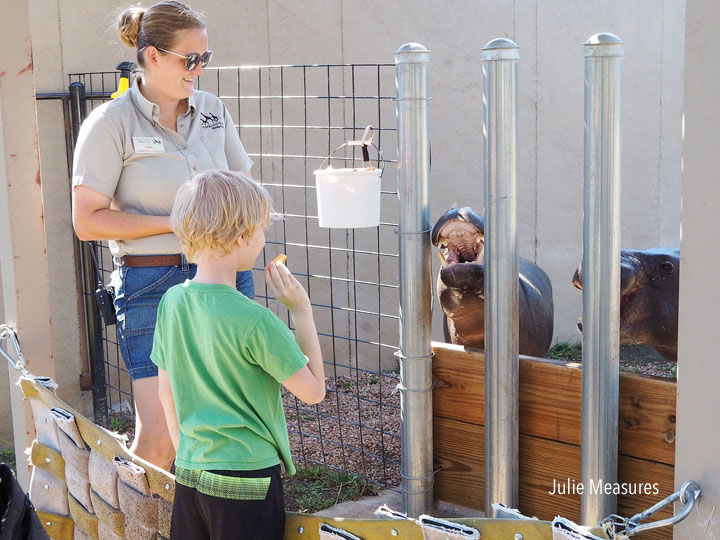 Some of the animal encounters only happen at specific times. It lined up that just as we were arriving at the park it was time to feed the pygmy hippos, so that was our first visit of the day. As you can see there is a barrier you stand behind and the keeper hands you food, in this case carrots, to toss to the hippos. They happily wait with mouths open to catch their treats! 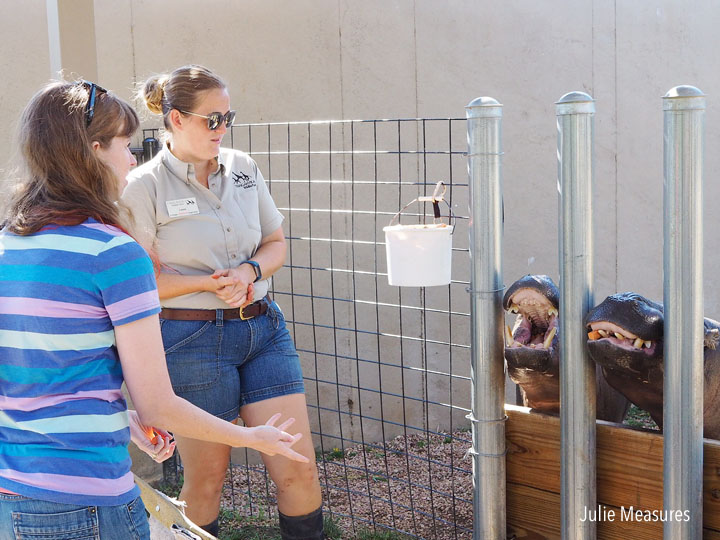 Many of the encounters are open all the time. So after we fed the hippos we headed over to the bird exhibit. My Nana (my maternal grandmother) was an avid bird watcher and I think because of her I have a special fondness for birds. 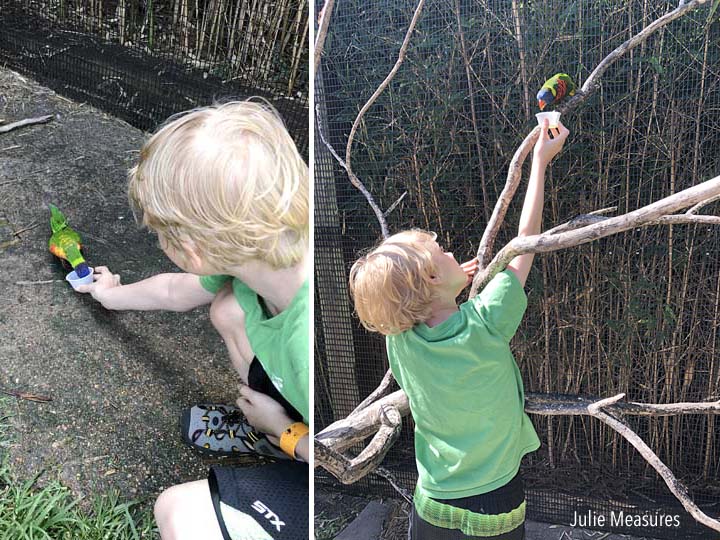 Everyone who wanted to feed the birds (cue music) was given a cup with nectar, which we were told was essentially like a smoothie the birds like the drink. They explained how to hold the cups and how to approach the birds. The birds weren’t super hungry so we were patient as we held our cups and looked to see which birds were interested in eating. 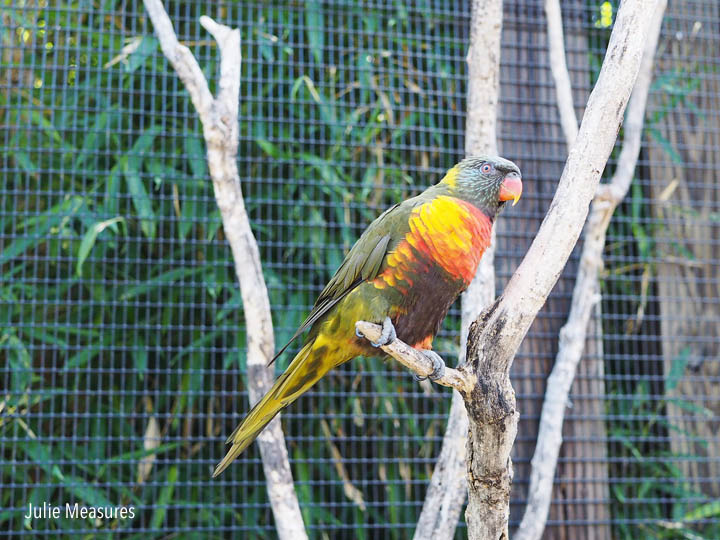 The birds in the encounter were Lories, and they were the most beautiful colors. Pretty chatty as well! 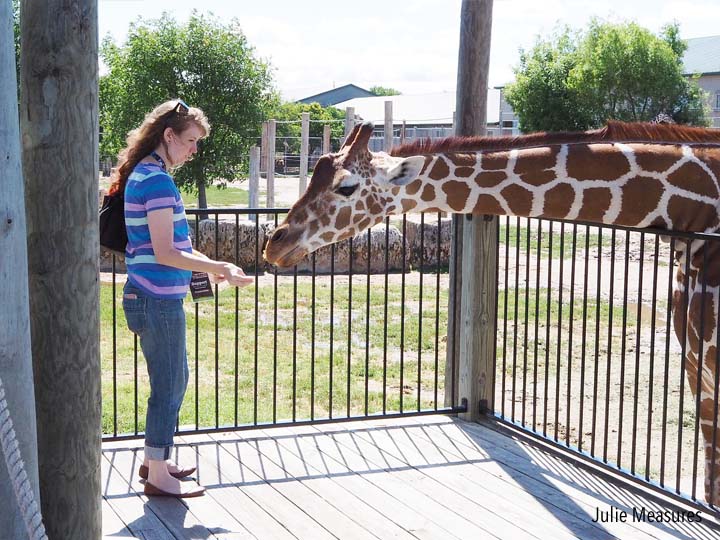 Okay, I had no idea how soft kangaroos are! The kangaroos are just one of the exhibits, and you don’t need an animal encounter wristband to pet them. There are signs, as well as an employee, to let you know to approach the kangaroos from behind. That way, if they don’t want to be petted, they can stand up and hop away. If you are in front of them you block their ability to leave. 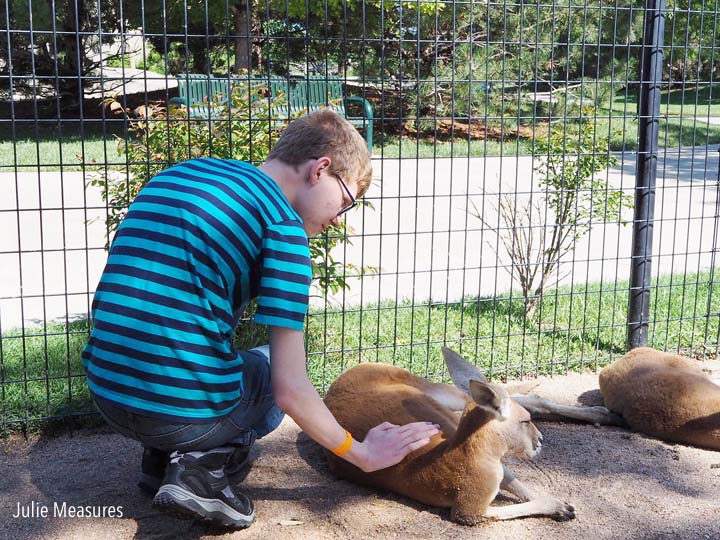 We all walked calmly up behind the kangaroos to pet their very soft fur. The kangaroos in the exhibit were all female, and we saw at least one hopping around with her baby. The male kangaroo is much bigger and was in a separate area. 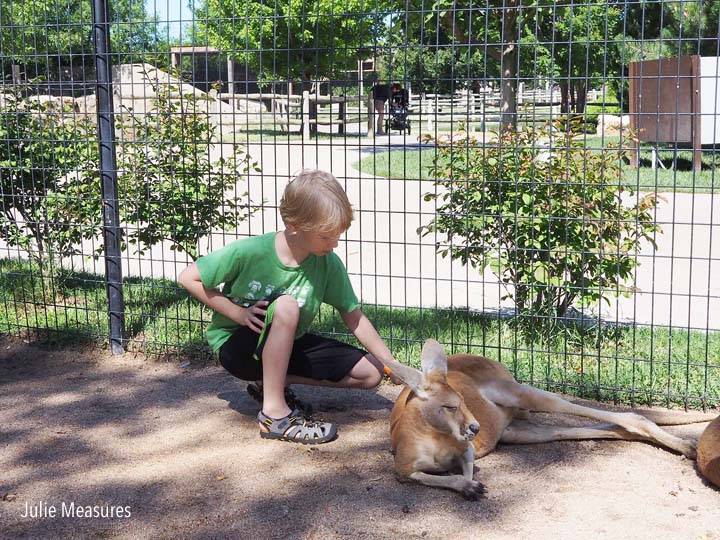 I think the lemurs were my favorite. They were so cute! You’re not allowed to take your own photos in the lemur area, but they do take a photo for you during your feeding. This is one of the animal encounter experiences. We were each given two treats, one in each hand. Then instructed to keep our hands closed until we were ready to feed the lemurs. On lemur island the lemurs are allowed to touch you, but you aren’t allowed to touch them. They grabbed our hands to pull them close to their mouths and eat their food. They startled Littlest when they grabbed him, but once he knew what to expect he was great. 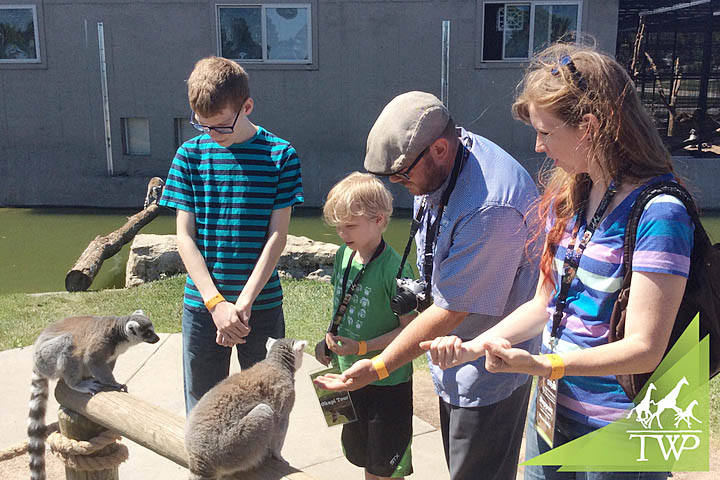 I have to admit that I had never heard of an Okapi until our visit to Tanganyika Wildlife Park. Turns out they are related to giraffes! We were able to take a behind-the-scenes, up-close-and-personal tour with a rare okapi. There are only 90 in the entire United States and Wichita has a total of three! We got to feed this particular okapi some carrots and lettuce, but he was much more interested in the carrots.

The Okapi tour is another area where you aren’t allowed to take your own photos. But, you will get to go back where the keepers go! We got to see the pens where giraffes give birth and learn so much about how they take care of the giraffes and okapi. The okapi is one of Africa’s rarest species and we heard the story of how this enigmatic animal was discovered and what great strides humans have had to take to preserve them.

The okapi tour is just one of the behind-the-scenes tours offered! You can even swim with penguins! 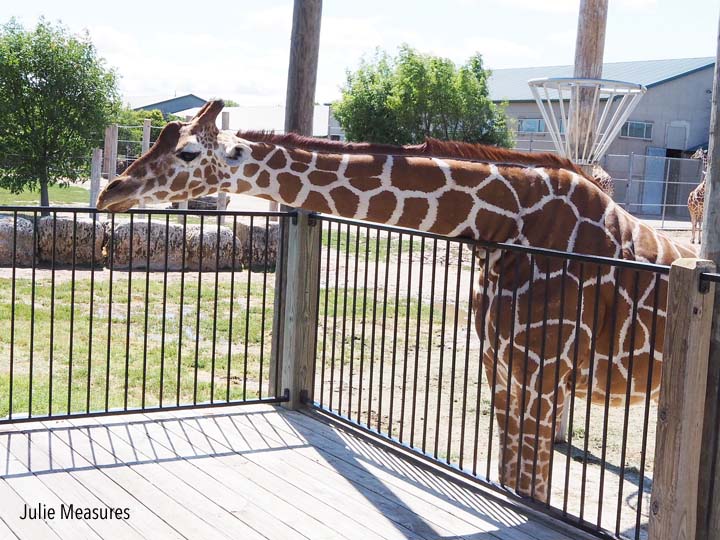 Walking back to the okapi area you walk next to the giraffe enclosure. I have to say, it’s one thing to stand on the platform where you feed them, it was something else to walk on the path next to their area and have your feet at the same level. Looking up at a giraffe is a pretty incredible experience. 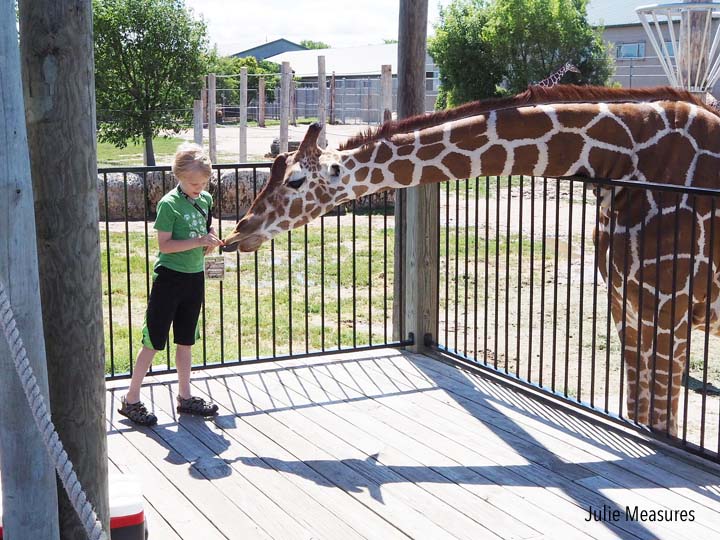 We couldn’t leave without riding a camel! I can’t tell you how excited Littlest was for this experience. Depending on how busy they are this animal encounter can close early, so make sure to get there early if you want to take a ride. 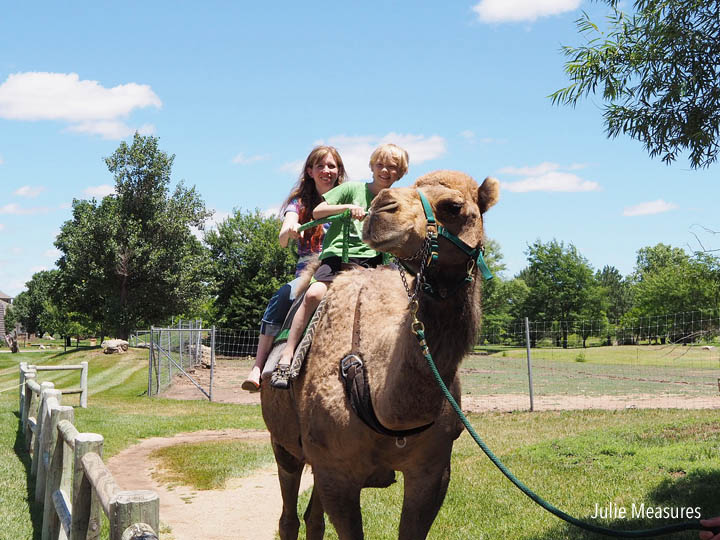 2018 is Tanganyika Wildlife Park‘s 10th anniversary! When they opened this family-owned facility had 15 exhibits and 3 interactive areas. Since then they have grown into the 3rd largest animal collection in Kansas, and one of the largest attractions in the state. They have over 40 exhibits featuring 9 interactive stations, 400 animals and 37 successful breeding programs. In fact, Tanganyika Wildlife Park is a world leader in breeding rare and endangered species. 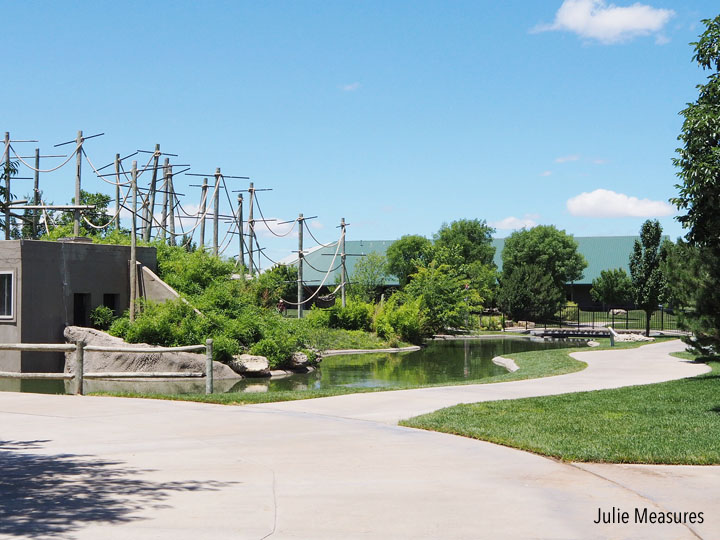 During our visit I loved learning that Tanganyika Wildlife Park has been given the Human Certified seal of approval, which means the care and welfare of the animals meet American Humane’s certification standards. Tanganyika is the first facility in Kansas and only one of 17 in the world to receive this seal of approval. 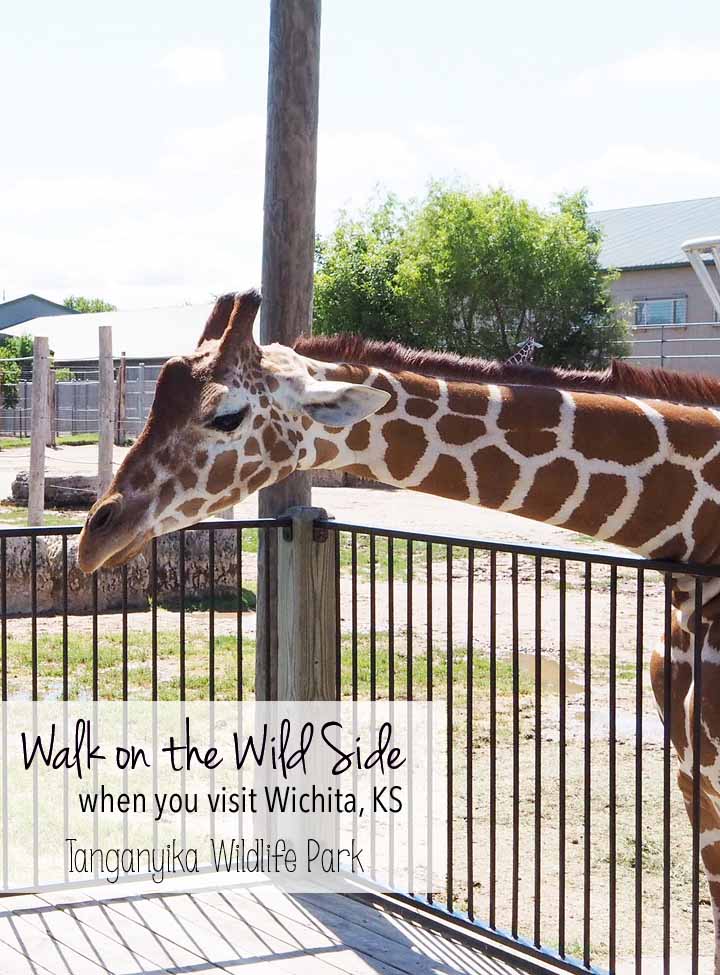 Want more family friendly activities in Wichita? Make sure to read my post How to Make the Most of your Wichita vacation!