Thank you Stencil Revolution for the patriotic USA map stencil. All opinions are my own.
Love to travel? I do! Get organized for your next trip with a USA Map Painted Corkboard 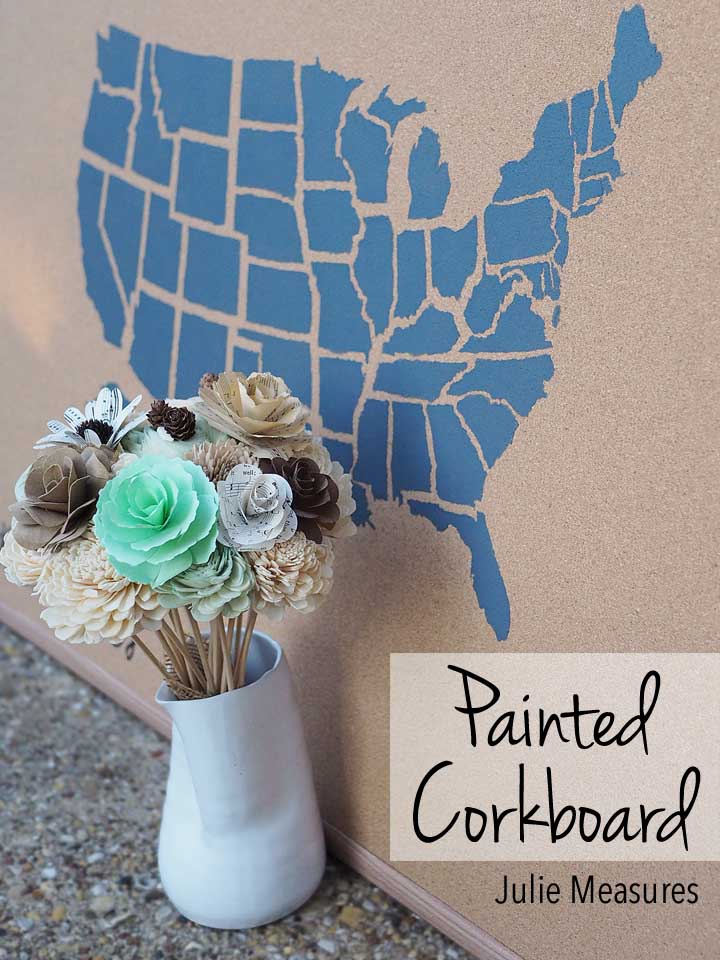 Travel and organization, it’s two of my favorite things represented in one craft! Visiting every state in the US has been a life goal that I think might be genetic. It probably started with my Nana, my Mom’s Mom. She loved to travel, had a list of the places she had visited, and knew which states she still needed to visit. The only state she never got to see was Alaska. After she passed away my Mom and her sister took a trip to Alaska in her honor.

My Mom is an avid traveler, she might love to travel more than any I know, and she is working on her own list of trying to visit all 50 states. Her birthday is coming up and when I saw this USA Map stencil from Stencil Revolution I immediately knew I wanted to use it to make her a birthday gift.

I had it in my mind that I was going to use the stencil to create a canvas for my Mom that she could hang on the wall. But when I went to the store to get the canvas I walked down the aisle where there were framed corkboards and got inspired. Instead of just a canvas to look at, the map could be a way to organize trips or just feel inspired by travel. 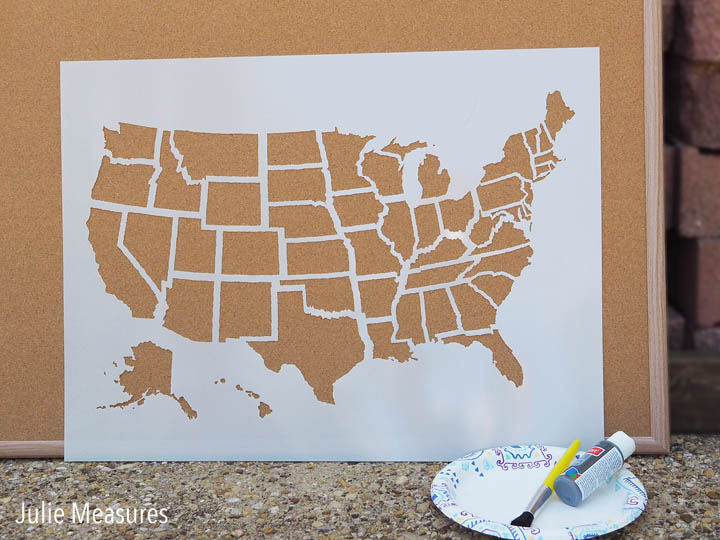 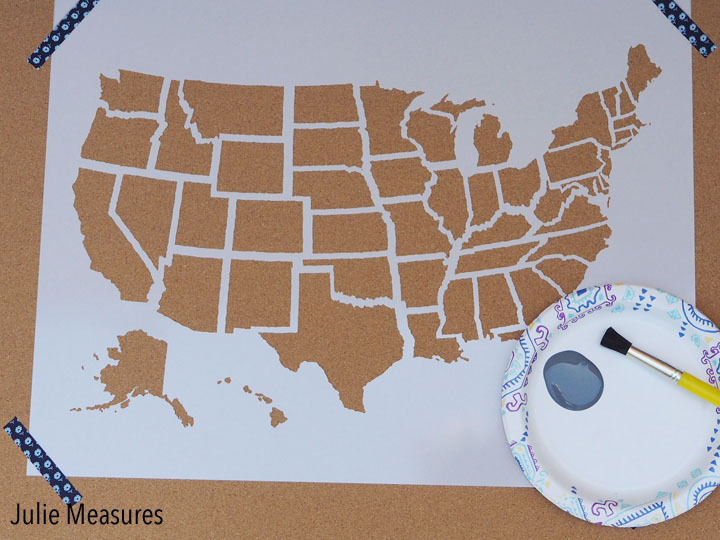 I positioned the stencil on the corkboard and then secured it with some washi tape. I chose to place my stencil in the center, near the top of the corkboard, rather than center-center because I wanted to be able to add some writing at the bottom. 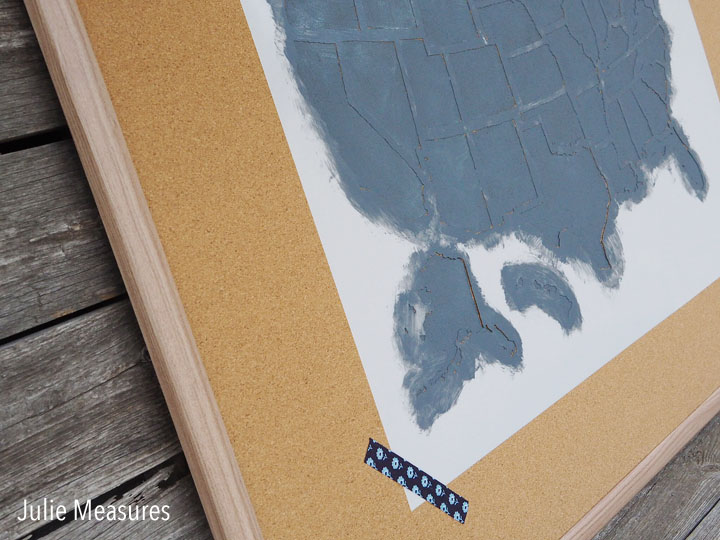 When you’re stenciling it is important that the stencil is pressed down firmly when you apply the paint. With the corkboard I just paid it down flat, using the washi tape to hold the stencil in place.

You can use a small roller or a dab (stencil) brush to apply the paint. For this project I chose to use a stencil brush. Make sure you off-load most of the paint before you carefully start painting to avoid the paint bleeding underneath any area of the stencil. (If you’re doing this on a wall, rather than a corkboard or canvas, one tip is to first paint a layer the same color as the wall. This seals the stencil to the wall. Then apply the color for the stencil. You’ll be sure not to have any paint bleeding! This works best with a large stencil that you aren’t moving around the room repeating.)

Because the corkboard absorbs paint I used two coats for my project. Allowing the paint to dry to the touch in between, which didn’t take long at all. 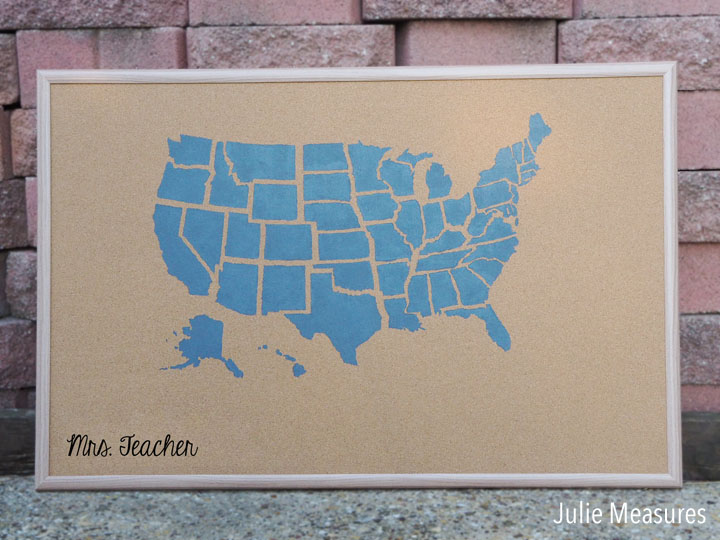 Once I finished painting my stencil I carefully pulled it up. The plastic for the stencils is pretty thick and I chose to wash my stencil when I was done. I used a washcloth to held rub off the paint and it’s almost as good as new! I took my time and was sure to be careful with some of the small pieces of the stencil.

The last step was to write on my Mom’s name. This stencil is a birthday gift for her, and I realized that it would be perfect for hanging in her classroom (she’s a teacher.) So I added her name to the bottom left corner (which isn’t really Mrs. Teacher…) 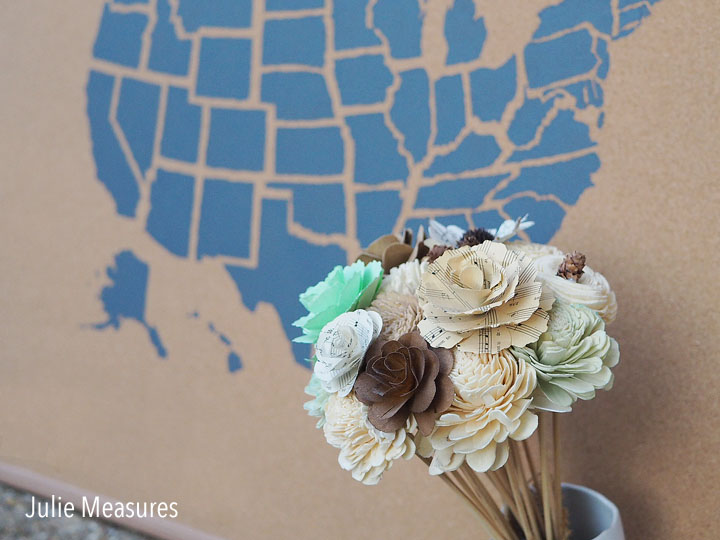 With dozens of stencils to choose from the painted corkboard possibilities are endless! Which stencil would you choose?